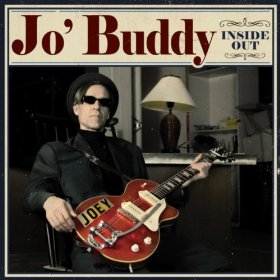 To celebrate 30 years on the road, this Finnish bluesman gathered up the various aggregations he’s toured and recorded with, along with some special guests, to deliver a dozen originals – each screaming “lowdown.”

“Finnish bluesman”? That’s right. Before you snicker, remember that the best instrumental surf band to come along in a quarter century was Laika and the Cosmonauts from Helsinki. But whereas the Cosmonauts took the template of the Ventures and Shadows and brought it up to date without bastardizing it, Jo’ Buddy (a.k.a. Jussi Raulamo) might get as “modern” as T-Bone Walker or as primitive as T-Model Ford.

He regularly hopscotches from his bands Groovy Eyes and the Uplifters to his duo with appropriately named drummer Down Home King III and his Cajun combo, the Crawﬁsh Kings. He also calls in pianist Wiley Cousins, who emigrated from Austin to Finland in ’97, harpist Wang Dang Juke, and former Blasters/Thunderbirds pianist Gene Taylor.

Whether he’s playing the rawest slide since Hound Dog Taylor, fuzzing up some New Orleans second-line, whipping up a crawﬁsh boil, imagining Jimmy Reed leading a swamp-pop band, or stripping things down to nothing but tremoloed baritone and Down Home’s drums, Jo’ Buddy is the real deal.

An ocean and ﬁve or six decades disappear, yet his ability to mix and match stylistic elements, let alone his tone-master guitaristics, never fail to yield refreshing surprises. This overview (on Ram-Bam Records) is a perfect introduction to this one-of-a-kind artist.

This article originally appeared in VG‘s March 2014 issue. All copyrights are by the author and Vintage Guitar magazine. Unauthorized replication or use is strictly prohibited.

Rick Berlin and the Nickel and Dime Band