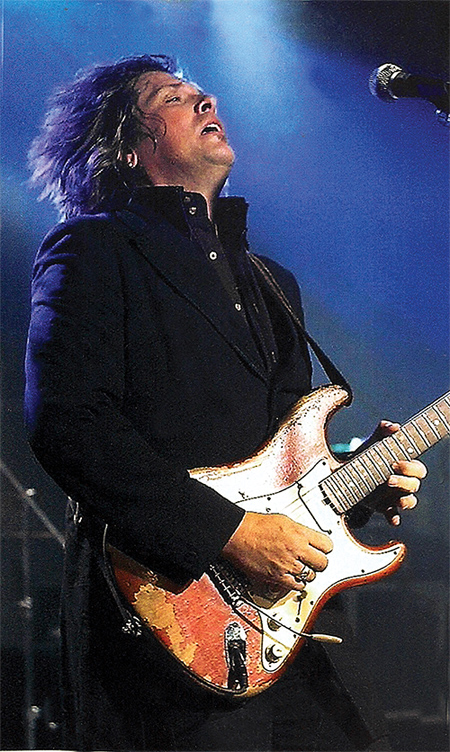 Jerry Riggs grew up in the ’60s/early ’70s, and though his hometown of Knoxville, Tennessee, wasn’t a mecca like Nashville or Macon, he says, “I was lucky to be exposed to a lot of great music, from Chet Atkins to James Brown, from Hendrix to traditional Appalachian mountain folk songs. I’m privileged to have grown up during such an innovative era for guitar.”

Riggs’ aspirations mirrored those of umpteen other babyboomers. Fascinated by the Beatles’ appearance on “The Ed Sullivan Show,” he acquired a Harmony guitar and an amplifier with a 12″ speaker, then listened closely to Eric Clapton, Jeff Beck, and Jimi Hendrix.

Riggs and fellow guitarist Jeremy Graf began playing in bands in that city before moving to Atlanta in 1978. They joined a band called Raggedy Ann, which morphed into an aggregation known as Riggs after a lead singer left and Jerry assumed lead vocal duties along with lead guitar.

“I never thought I would be a singer/guitarist,” he reflected. “I was quite happy just playing guitar. We played some great gigs at the Fox Theatre and the Agora Ballroom – opened for Rush, AC/DC, Humble Pie, Judas Priest, and the Babys.”

Riggs’ primary guitars in those times were vintage Fender Stratocasters, which he still uses.

“My main guitar, for many years, has been a ’64 Fiesta Red Strat,” he said. “I bought it from Jeremy. I had been playing a ’61 sunburst Strat for a while, then traded a ’72 Les Paul with a factory Bigsby for the red Strat. In the mid ’80s, I replaced the pickups with a set of single-coil EMGs.”

Riggs’ first shot at the big-time was on the soundtrack of the 1981 animated film Heavy Metal, after Irving Azoff offered the band a contract with his Full Moon record label.

“We got to work with Roy Thomas Baker on ‘Radar Rider’ and ‘Heartbeat,’” he enthused. “What an experience! First time in Hollywood, recording with the biggest producer at the time.”

Soon afterward, the band began working on what would be its only album, with Andy Johns producing.

“When Heavy Metal hit theaters in ’82, we were recording the Riggs album at Criteria Studios in Miami,” he said. “I remember going to the movie while on a break, and yelling when ‘Radar Rider’ came on.

“Andy brought a great vibe and wealth of knowledge to the studio,” he recalled. “Having worked with the Stones and Zeppelin, he knew how to get what we wanted. He was totally supportive and open to try anything, and brought in a great old Rickenbacker 12-string that added a wonderful texture to ‘Christine’ and ‘Over and Over’.”

Unique guitar licks can be found on Riggs, but it didn’t take a plethora of instruments to acquire such sounds.

“They say timing is everything, and in our case it wasn’t on our side,” he said. “The album was released the same week as the first Asia record, which was also distributed by WEA, and it seemed promotional resources were funneled into that project.”

The band recorded more demos, but split (as friends) in early ’83 before attempting a second album.

After moving to Florida, Riggs hooked up with Pat Travers, with whom he recorded and toured for a decade.

“Sonically, it was a nice contrast,” he recounted. “I’ve always been in two-guitar bands, so I felt right at home. I love the tonal separation it creates.”

At a gig in New Orleans, Riggs’ Strat and Travers’ legendary Gibson Melody Maker were stolen, but later recovered.

These days, Riggs continues to live in central Florida, and performs with other veterans in various all-star aggregations.

“My plate stays pretty full,” he said. “To top it off, I get to help raise my two wonderful sons, Noah and Ethan. Life is good!”

However, he still recalls those heady days of the success of the Heavy Metalsoundtrack.

“It was truly a magical time for us, and I’m grateful for the opportunity to have lived the dream,” he said.