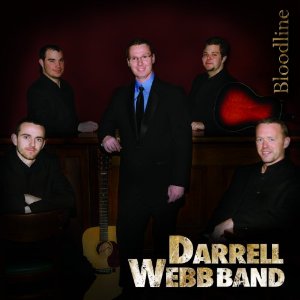 Darrell Webb’s career began with a stint with the Lonesome River Band, followed by time in J.D. Crowe’s group. He also played on two of Dolly Parton’s bluegrass albums. In the last several years, he played guitar and sang lead for Michael Cleveland’s band, Flamekeeper.

Here, we get fully orchestrated version of “Kings of Orebank,” along with 11 other songs. Although Webb is an accomplished songwriter whose work has been recorded by Lou Reid and the Lonesome River Band, others wrote the songs on Bloodline. Highlight covers include “The Kings of Orebank” and a version of Stanley Johnson’s “Big Black Train,” which features fine dobro solos by Tyler Kirkpatrick. The title tune, written by Larry Cordle and Connie Leigh, highlights Webb’s arresting lead vocals and precision mandolin licks. Overall, Webb’s band sounds more like contemporary acts such as Blue Highway than traditional groups like Del McCoury. While not as tightly wound as Flamekeeper or Rhonda Vincent’s groups, Webb’ is tight, tuneful, and worthy of a place in your bluegrass library.