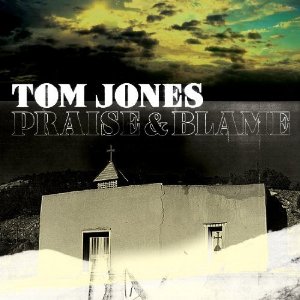 A Tom Jones gospel album? The image that first comes to mind is probably something like Elvis’ How Great Thou Art – big production, choirs – and Jones certainly has the lungs to deliver that in spades. But his son/manager, Mark Woodward, obviously had a different idea when he called Ethan Johns to produce.

Here, Johns takes the Welsh singer back to the basics – not unlike Ry Cooder’s production on Mavis Staples’ We’ll Never Turn Back. The rhythm section (sometimes just Johns playing guitar and kick drum) set up in a circle and played live in the studio – Jones laying down vocals without even using headphones – and were done in 12 days flat.

Instead of copying source materials, they came up with mostly new arrangements – in some cases, barely referencing the old recordings. Hence, the lowdown riff Johns plays on Jessie Mae Hemphill’s “Lord Help” has nothing to do with what the blues singer/guitarist originally played. Likewise, the definition of gospel is flexible enough to accommodate John Lee Hooker’s “Burning Hell” – again, with Johns’ distorted slide riff utterly distinct from the Hook’s version.

It would be sacrilegious (no pun intended) to compare Tom Jones’ version of “Don’t Knock” to Mavis Staples’ reprise of the Staple Singers’ ‘60s standard on her new CD, but, while Staples is more expressive, atop a loping groove, Jones rocks out over Johns’ one-note garage riff.

Johns played a different guitar on virtually every track – a Firebird on “Burning Hell,” a Phantom Teardrop on “Run On,” for instance – mainly through a late-’50s tweed Champ. (Among others, a Tele with a bender and Andy Blake Pickup Wizard pickups, a Harmony archtop, a ’69 Martin D-18, a ’62 Gretsch 6120 Nashville with Filtertrons were also employed – through Premier or Kay reverb tanks.)

In addition to such gospel fare as Blind Willie Johnson’s “Nobody’s Fault But Mine,” Mahalia Jackson’s “Didn’t It Rain” (penned by Roberta Martin), and traditional favorites “Run On” and “Ain’t No Grave” – the liners mistakenly crediting Jones and Johns as writers instead of arrangers – Jones is equally comfortable on the folk/country side of gospel, as evidenced by Dylan’s “What Good Am I?” and Susan Werner’s “Did Trouble Me.”

What direction Jones will take next is anybody’s guess, but after his recent riveting Letterman appearance, one hopes he’ll give this repertoire a nice long run on the road.