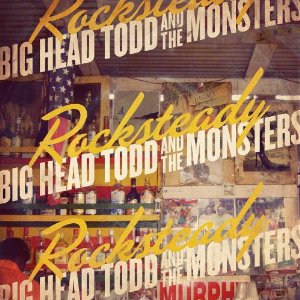 It’s tough to pin a tag on the lapel of Big Head Todd and the Monsters. The band ably jumps from flat-out rock and roll to deep blues, even jazz, funk, and soulful R&B.

Rocksteady is the band’s eighth studio release. With tracks honed on the road, the groove is already cut deep on this disc.

Big Head Todd is Todd Park Mohr, bandleader and frontman of the trio that came out of Colorado in the mid ’80s. Mohr guides the power trio as a fine guitarslinger, ably backed by drummer Brian Nevin and Rob Squires on bass and vocals.

Straight out of the box, the title track rocks with a feral intensity. With a Jamaican vibe, the rhythm isn’t pure rock steady, nor is it ska or reggae. But it rides a rocking blend of JA cool and the band’s own vibe.

The cover tunes offer a unique take on classics; their version of the Rolling Stones’ “Beast of Burden” gives satisfaction. And they make their take of Tom Russell’s “Muhammad Ali” all their own. The deepest cut on the disc may well be the version of Howlin’ Wolf ’s blues warhorse, “Smokestack Lightning.” As with their hit cover of John Lee Hooker’s “Boom-Boom,” the song starts as a near duplicate recreation of the original, before they rock it their own way. Good stuff.