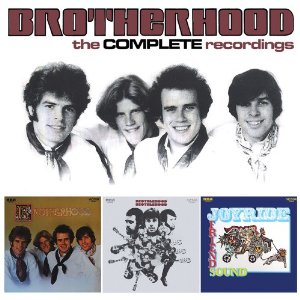 When guitarist Drake Levin, bassist Phil Volk, and drummer Mike Smith split from Paul Revere and the Raiders in spring of ’67, the Raiders had just scored five Top 20 singles in less than 12 months. They felt the need to create music that was more complex, more mature, and more reflective of musical personalities, rather than those of Revere and singer Mark Lindsay, the two Raiders still in the original quintet that helped forge the “Northwest sound” (think Kingsmen, Sonics, Wailers) before becoming TV stars and a virtual five-man hit factory.

Sadly, the band they formed, Brotherhood, was stifled at every turn – faced with lawsuits from Revere and Columbia Records, and signed to RCA, whose promotional budget was being shoveled into Jefferson Airplane. They recorded three albums, each more progressive than its predecessor, that have not seen CD light until now.

“Walrus”-era Beatles influence is obvious on songs like “Love For Free” from the band’s self-titled 1968 debut, while “Lady Faire” veers into lounge jazz, right down to French lyrics and accordion. “Louie Louie” this was not – although Levin could bring the gnarly, as on “Ice Cream.”

Brotherhood, Brotherhood is more pop-oriented, with a heavy, Vanilla Fudgey cover of “California Dreamin’,” but by the time of Friend Sound/Joyride the music was almost purely experimental (with “Joyride” crediting 15 songwriters). It’s a travesty that it’s taken 45 years for these albums to resurface and sad to think how much more recognition the late Levin’s guitar playing deserved.