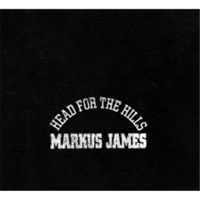 James is Virginia-born but has spent time in Northern California and West Africa. His work with three Malian musicians resulted in the documentary film Timbuktoubab. He points out the too-similar-to-be-coincidence similarity between the black fife and drum bands in Northern Mississippi’s hill country and West Africa.

The 16 cuts here are about as raw as blues gets, with James’ electric guitar, gourd banjo, slide dulcimer, and one-string diddley bow backed by drums, hambone percussion, and foot stomping – variously provided by one of five drummers (including descendants of Junior Kimbrough and Otha Turner).

There are essentially no chordal instruments – not missed in the slightest – except for “Sleepyhead,” which features James’ acoustic strumming backed by chirping crickets. Lest this brings images of New Age to mind, any of the CD’s other 15 cuts will quickly dispel that.

This is about as raw as blues gets. James’ dirt-road vocals, Blind Willie Johnson-like bottleneck, and the mantra-like drumming are presented in all their lo-fi glory – recorded on porches and in car ports. In fact, a state-of-the-art studio would only mess up a good thing.