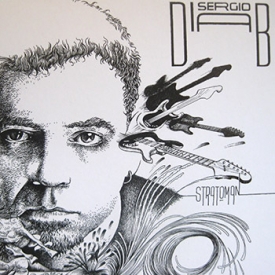 Brazil and the guitar have a long, prolific relationship with each other, from the classical compositions of Villa-Lobos to Laurindo Almeida’s mix of classical and jazz to the bossa nova of Antonio Carlos Jobim and Joao Gilberto. Two standouts carrying the torch today are Joao Erbetta and the equally eclectic Sergio Diab.

Hailing from Rio de Janeiro, Diab has worked as producer and sideman, mainly for singers, but on his instrumental solo debut his Strat does the singing, tastefully employing elements of rock, blues, and jazz. Along with the obvious Carlos Santana influence, he lists Les Paul and Chet Atkins.

He composed eight of the CD’s 10 tunes, including two featured in the movie Idolo, about Brazilian soccer star Nilton Santos. His rendition of the evergreen “Besame Mucho” is a treat, so the fact that his melodic originals are also memorable is impressive indeed.

The surprise of the set (following the lush, noir “Sentimental D”) is the country two-step “El Matrero,” peppered with pedal steel and honky-tonk piano. Then accordion flavors “Mojo,” giving the bossa nova a Gypsy tinge.

This earns the one-word review “mais” – Portuguese for more.