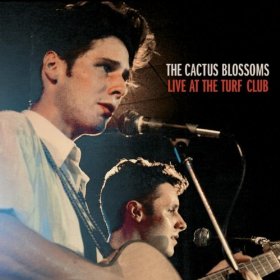 In an age when cultural currency seems measured in units of irony, brothers Page Burkum and Jack Torrey are an astonishing revelation. The duo fronts the Twin Cities-based Cactus Blossoms, drawing inspiration from the likes of Bob Wills and Lefty Frizzell, but also honoring the country tradition of brother harmonies that includes the Monroes, Stanleys, and Louvins. All the while, the pair exhibits earnestness where others so young might resort to yokel-y accents and corn-pone humor.

The highlight is the Torrey composition “Change Your Ways Or Die (The Buffalo Song),” with lyrics that sound as if they could have been scratched on the back of an old Sinclair map out on the dusty plains during the FDR administration and a western jazz lick that would do Junior Barnard proud. As Torrey sings on the closer, a cover of an Edgar Dowell/Andy Razaf prewar jazz chestnut, “Yes sir!”