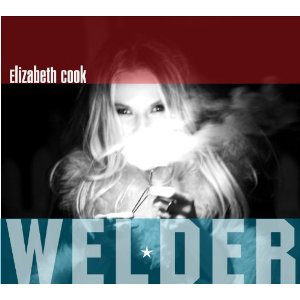 Elizabeth Cook’s songwriting jumps to the forefront on this disc, whether the song is steeped in rock, carried by a funny lyric, or is a serious countrytinged ballad.

On first listen, the lyrically clever “El Camino” is highlighted by buzzsaw electric guitar from Tim Carroll. That feel is also evident on “Yes To Booty” and “Rock and Roll Man,” and any of the three could be a hit. Then there’s “Heroin Addict Sister” and “Mama’s Funeral,” a country tune with an oddly sweet lyric considering its subject matter. Carroll supplies subtle guitar work on the track – just a few bars of slide that perfectly accents the song. Those songs and others like “Girlfriend Tonight” show Cook’s writing talents.

On several tracks, Cook gets help from some famous friends; Buddy Miller plays guitar on “All the Time,” a bluesy country tune that opens the album and sets the mood. Rodney Crowell and Dwight Yoakam lend vocals, but they’re really just icing on a cake that’s already pretty sweet. With Welder, Cook establishes herself as a songwriter and singer who transcends genres.