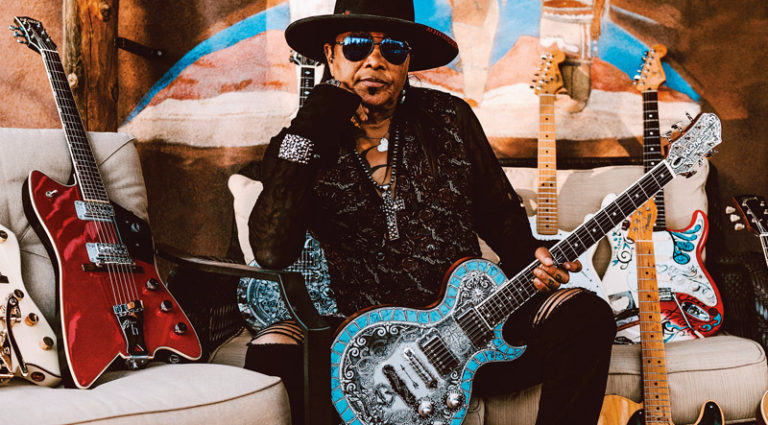 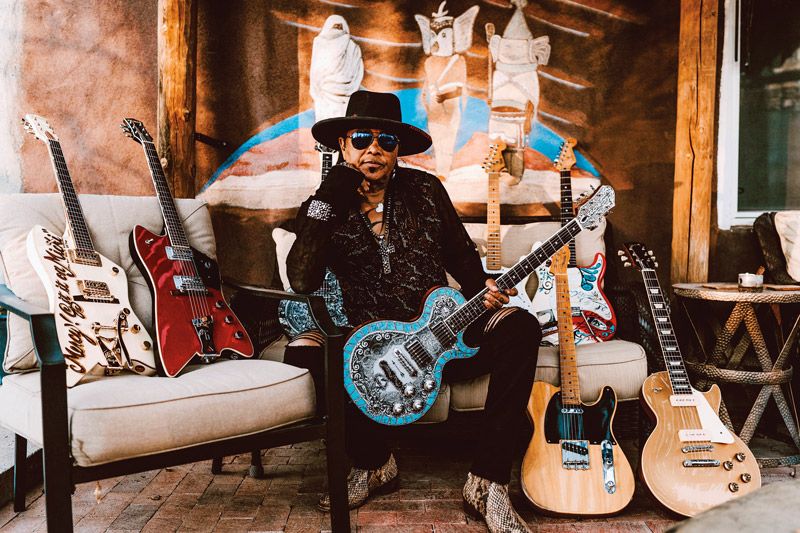 He was the real-life team member on the infamous Charlie Murphy/Prince basketball game parodied on “Chappelle’s Show,” but Grammy winner Micki Free’s latest is bursting with the sounds of blues-rock and psychedelia. Turquoise Blue has high-profile guests, but Free is all about emotional connections and crunchy tones. There’s plenty of wah and overdrive, but Free’s artistry shines through with grace and bold conviction.

What inspired Turquoise Blue?
The frickin’ Covid, just like everybody else. I got locked down and went crazy. I started writing songs and riffs, getting into it, and doing what I do.
The first concert I ever went to was Black Sabbath, and Tony Iommi is the master of killer grooves. What tripped me out about Sabbath is they were funky. I also took inspiration from Gary Clark, Jr.’s last record. I wrote songs that I felt, and it just so happens to be an eclectic mix. In the end, it still has that Micki Free vibe.

There’s a bit of Billy Gibbons influence on the record.
Dude, you weren’t hearing a little bit – you were hearing a lot (laughs). I love The Reverend Billy G. He gave me a red Billy-Bo guitar, and I recorded all the rhythm tracks with it. My main thing is tone. If you can’t get the tone right with your fingers, then it ain’t happenin’. Gibbons is a major influence on my tone and the way I play. He knows where to put it, he knows when to lay out, and his tone is a crippler (laughs)!

How great was it working with Steve Stevens?
I love Steve. When I was in Shalamar, I saw him with Billy Idol. He said, “Hey, I love the way you dress, and especially your ‘Dancing In The Sheets’ video when you swing down and break through the window like Zorro.” (laughs) The first solo he did was on “My Big Regret” – the flamenco solo, which is awesome. He also plays the first half of the solo on “Bye 2020.” I did the same thing with Christone “Kingfish” Ingram and Gary Clark, Jr.; I play the second half. There’s a difference in styles, and I wanted people to dig on that. Kingfish was burning, so I had to jump in with my little thing. I did some Cream-era Clapton with Albert and Freddie licks. I just put it into a big bowl and mix it up.

“World On Fire” dips into your Santana bag.
That song is about all the s**t going on in the world. It was my homage to Carlos. His wife, Cindy Blackman-Santana, is in a band with me called American Horse Trio and she played on the track. I tried to get Carlos to play, and he said, “Why do you need me? It sounds great.” (laughs) I was in that vein, but this was all Micki Free s**t. I can’t play like Carlos, but I can play what I feel when I listen to Carlos.

What’s your main guitar?
I play a Teye with turquoise inlays, and it sounds f***ing good – captures a warm, bluesy, rock sound that you can manipulate. I love their guitars – shout-out to Evert Wilbrink. I just picked up a ’59 Strat with a rosewood fretboard, I have a Hendrix Monterey Strat that sounds like God, and a Hendrix Flying V that I love. My wife did the paint job and Gibson put special pickups in it for me.

“Heavy Mercy” has a Robin Trower feel.
I love that loopy chorus effect on the solos. It’s so sexy. I like to bend notes and let them swell. I don’t do arpeggios and all that. My whole thing is feel and tone. I’m a Marshall purist and love Bluesbreakers; I have a 1974X and three 100-watt Hendrix stacks, but you can’t use them unless you’re playing Woodstock or something (laughs). What did you think of my version of “All Along The Watchtower?”

It’s a tour de force!
(laughs) That’s my favorite Hendrix song written by Bob Dylan (laughs). I’ve heard so many versions, so I tried to stay close to Jimi’s, but didn’t try to emulate the wah swells; I’m not Jimi. The band was rockin’.

What’s next?
We’re releasing “Judicator Blues” on blues radio, which features Kingfish. I want to tour. It’s what I do. Turquoise Blue is the best record I’ve ever made. My friends are on it, my soul is in it, and it’s a sign of the times, as Prince used to say. I hope people dig it.