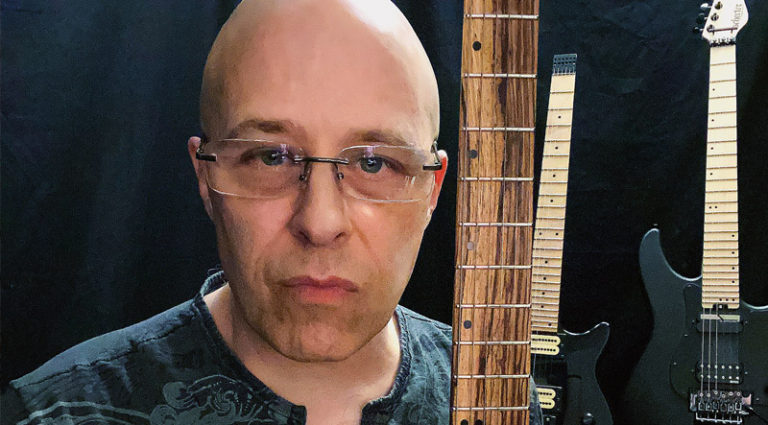 A lot of guitarists aspire to play jazz-rock, but it’s a high bar. Based in St. Louis, Scott T. Jones hits the mark – and then some, heard on his awe-inspiring album Fictional Characters. With a crack band, including the late Allan Holdsworth’s keyboardist Steve Hunt, Jones weaves deft fusion instrumentals and his guitar lines are simply stunning, despite ongoing hand issues. Mostly known for its ribs, beer, toasted ravioli, and famous arch, St. Louis now has another reason to be proud.

We hear a lot of fusion nods in your playing: Holdsworth, Scofield, Henderson. Who are your influences?
As much as I try and leave the obvious imitating behind, I do slip into a line or articulation now and then. And it use to bug me, but I kind of just embrace it now and consider it a continuation of certain dialects within a language. My full list of guitar influences is long, and spans multiple genres and instruments, but you’re correct about the aforementioned trio. Then there’s Metheny, Martino, Stern, Pass, Lukather, Landau, Vai, and many more.

Talk about your love for Rush and how that got you to fusion.
Initially, I started on drums. At one point, a friend said, “You should check out this band Rush,” – and my head exploded on the spot. That kicked off my pursuit of learning Rush’s entire catalog on drums. My parents divorced when I was 14, and my mom and I moved into a condo. The neighbors and police didn’t care much for the noise, so I made the decision to just sell my drums, buy better guitar gear and make the change. Then, somewhere in a magazine article Rush mentioned they listened to jazz-fusion, specifically Allan Holdsworth. I thought “Well, if that’s how they got this good, I’m in!” I pursued that path from that point on.

How do you get that thick-layered guitar harmony in your cover of Holdsworth’s “Atavachron”?
Interestingly enough, the harmonies didn’t come to me until late in the mixing process. Allan use to do this kind of harmony back with Bruford and UK, and some of his early solo work had it. It hit me one day, after I had already tracked the top line melody, that it would be a cool nod to that era of his playing, so I tracked my guitars one harmony at a time.

How did you develop such a complex soloing style and harmony, especially soloing over wild changes?
My 19-year-old daughter is in college, studying music.I didn’t get that chance, but I did practice and study my ass off on my own. I had an eight-hour practice routine and listened to thousands of hours of these players. I’d learn the solos and heads, not always on my instrument, but I’d internalize them to the point of being able to scat along with solos. Combined with the technical stuff, and theory info I was working on, this language began to coalesce into something.

Tell us about your hand issues.
I’ve had trigger-finger surgeries – arthritis and a pinched nerve in my C6-C7 – that has weakened the pinky on my fretting hand. This past year, I’ve retrained my playing to completely avoid using my pinky unless absolutely necessary. My hybrid picking also took a hit with a new trigger forming in my middle finger of the picking hand. I just retrained my right hand to use my ring finger; it all switched over perfectly and my playing is better as a result.

How does a fusion guitarist in St. Louis make a living?
I’ve played in almost every cover band in town at one time and was the salaried staff guitarist, music director, and arranger at a high-tech mega-church for almost two decades. That ended in 2008 and I teach privately now. I also quit playing in the cover band scene to be more present for my kids when they were with me. The hand issues now keep me low key and teaching only, but I’m in a good place musically.

Which guitars, amps, and effects did you use on the album?
The main guitars were my Kiesel Zeus, a Carvin Holdsworth HH2x, and a Schecter Sun Valley Shredder with a Floyd and Sustainiac. The amps were completely self-contained profilers: a Kemper Profiler Stage, Line 6 Helix software plug-in, and an old Digitech RP1000. Keyboardist Steve Hunt mixed the album, and he had a lot to do with my sound as well. He took what I’d tracked and made it shine, cut through, and sparkle. He did play with Allan, so I wasn’t worried about giving him the freedom to tweak. Steve nailed it.

Your guitar tone on the album is ferocious. Did you record your amp at considerable volume?
It was all within the DAW – zero speakers saw vibration. I live in a condo and am a good neighbor, so I hate being “that guy.” (laughs)

Really?
Yes. Believe it or not, there are no live or miked amps on the album.