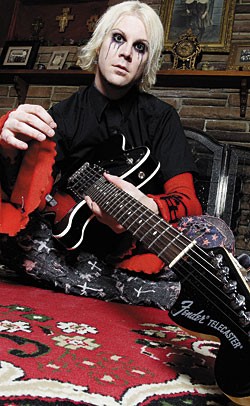 Best known as the scary-looking guitarist for metalmen like Rob Zombie, Rob Halford, and Marilyn Manson, John 5 is also regarded as a country twanger and namesake of his own signature Fender Telecaster. Recently, he released his fourth solo album, Requiem, again a blend of terrifying metal instrumentals and bad-ass country shred. Let’s learn more.

What was your goal for this record, guitar-wise?
I wanted to put larger pieces of music together – like little symphonies of guitar music, but not make it sound neo-classical. I wanted to take you through different journeys and different sounds. Because the music became so long, we had to put ID markers in the songs, but when you listen to the CD it all connects. We started writing on the Zombie tour and I would fly in whenever I could to record. We only got studio time after midnight, so it was grueling and fun, but your mind seems to wander in a different area in late hours. There are definitely all different types of music on the CD. There’s Western swing, country, classical, and lot of guitar shredding. So I think it’s going to be any guitar player’s wet dream.

What are a few of the effects we hear on the album? There seem to be a fair number of warbling, tremolo-type sounds.
I didn’t use too many effects. The warbling sound is a Boss Chorus cranked all the way up. We employed a Theremin like the Beach Boys used, and a Line 6 delay pedal with a reverse effect. I also had my basic Boss Super Overdrive and, for rhythms, a Bass Micro synthesizer by Electro-Harmonix.

Tell us about the Fender John 5 Telecaster. How well has it been accepted by the normally traditional audience of Tele players?
In the past year, I’ve seen a lot of the J5 Telecasters out there. I’m very proud of that because I love the Telecaster and having my name associated with that great guitar. We’ve done three models so far. I still play my prototype J5 Telecaster and Fender is going to make a Squier Signature model based on it, priced in the low $200s. It’s going to have two humbuckers, chrome pickguard, and white binding like a Tele Custom. It will have a regular Telecaster headstock, too. My prototype guitar has been my main guitar for many years. I love it more than anything in the world.

What is different about that Twisted Tele neck pickup?
It uses the longer magnets from a Jazz Bass pickup. That makes it very usable – there is enough dynamic range for leads without getting muddy.

What does the three-per-side headstock do for you, as opposed to a traditional Tele headstock?
I loved the Fender Villager acoustic guitar when I was growing up, and always thought the headstock was wild. I love doing things a little different, a little unorthodox, and wanted to have that kind of headstock on my signature Telecaster. Boy, did it get a lot of attention. I also shaved the side of the neck so I could do comfortable string bends. I think it looks very shocking as well when you pull it out of the case. A lot of people were like, “What’s that?” That also happens when I walk into a room sometimes, so I wanted to have a guitar that was as odd looking as myself.

Where did your country chops come from?
I’ve always been interested in country guitar playing. I used to love to watch the old pickers on TV and it was so different from the rock and roll that I was doing. In 1996, when I was playing with K.D. Lang, I knew a little bit about country and could get my way through a song. But there was a pedal-steel player on the road with us named Larry Campbell (also a longtime sideman for Bob Dylan). He played fiddle, banjo, guitar, and mandolin and knew everything there was to know about country music, so he taught me a lot. After that, all I did was take country guitar lessons, learning bluegrass, flatpicking, banjo rolls, double-stops, behind-the-nut bends, and chicken picking. It was like learning guitar again all over.

What are the prize vintage guitars in your collection?
I have pretty much all the Teles from 1962-’78, but I need to finish my black-guard collection. All I need is a ’51. But I also have a ’51 Esquire and a ’53 Tele, both great condition. My big prize, however, is a 1950 Broadcaster I purchased from Norman’s Rare Guitars. It’s in his book, and the description is, “One of the cleanest Broadcasters ever seen.” I paid an unbelievable amount for this guitar… and sold my soul!

You’ve worked with a lot of notable metal singers. What does it take for a side man to remain a valuable commodity gig after gig? I assume that your guitar playing is only part of the story – you probably have the right personality skills to navigate these bands.
The number one rule for playing for rock bands is that you are playing for the artist – you are not playing for yourself. It’s their gig. You have to make that person sound as good as possible. You have to be aware that if a certain artist doesn’t like hamburgers, you don’t come on the bus with a Big Mac. Also, be aware of your stage presence. Not too much, not too little – just the right amount. And don’t just bust into a solo onstage. If they want you to solo, they’ll let you know. So in all, you have to have a fair amount of self-awareness, both onstage and off. It’s what helps you keep your current gig… and score the next one.


This article originally appeared in VG‘s August 2008 issue. All copyrights are by the author and Vintage Guitar magazine. Unauthorized replication or use is strictly prohibited.
John 5 Dimarzio
Current Issue