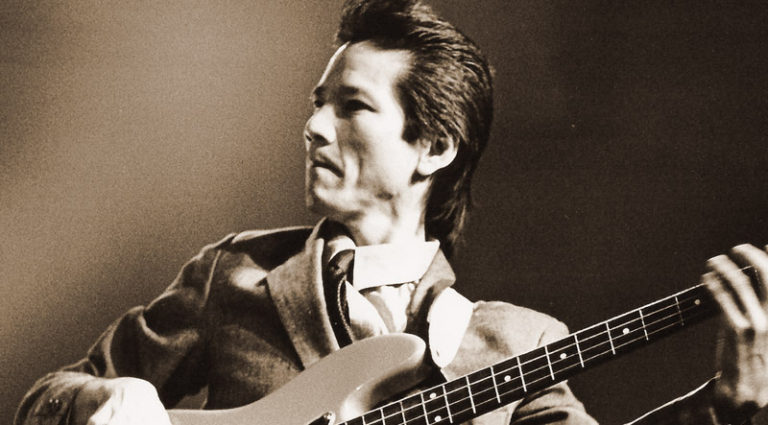 His business card read “Phil Chen De Bassman,” and his picks had “OD” after his name, standing for the Order of Distinction award he received in 2014 for his contributions to Jamaican music.

Players who knew and worked with Chen shared stories and feelings about him with VG. Doors guitarist Robby Krieger, who was a bandmate in the Butts Band and in a Doors redux group with Ray Manzarek, said, “Phil was one of my best friends and one of the most unusual musicians I ever met. He truly loved music and influenced my love of music more than almost anyone.”

In an unpublished 1986 interview, Chen recounted, “I left school and started hanging out with my cousin’s group, the Vagabonds. Jimmy James, the lead singer, was incredible. I was their little roadie. I borrowed a Mel Bay guitar book and copied everything, but I picked it up from watching the guys. Then, in 1964, they decided to go to England, and needed an extra guitarist. I was 18 and wasn’t playing bass yet.”

The group morphed from ska to soul a la James Brown, Ben E. King, and Solomon Burke.
“We were managed by Peter Meaden, who managed the High Numbers [the Who], so we were the support group for them, Manfred Mann, and the Yardbirds,” Chen noted. “But we were one of the biggest bands. After two or three years, the bass player left, so I switched to bass.”

“Phil and I struck up a friendship based on our love of family and all things bass-related – especially the genius of James Jamerson,” recalled L.A. bassist Bob Glaub (Jackson Browne, Warren Zevon, John Fogerty, Linda Ronstadt, among others). “We’d get together in his man cave and nerd-out on bass lines, tone, and strings. It was there that Phil also turned me on to the great Jamaican guitarist and composer Ernest Ranglin.”

Chen championed Motown bassist Jamerson and jazz/studio guitarist Ranglin, mailing mix tapes and singing their praises. “I was highly influenced by James,” he said. “He was very hard to copy because he was all over the place, but so melodic. And he never repeated himself; it’s amazing.”

“Phil was a really serious musician,” Krieger noted. “He would constantly be practicing. He’d say, ‘Must practice, mon, bloodclaat rass!’”

Though he didn’t read music, Phil got work in London studios, doing sessions with Linda Lewis. Jeff Beck would show up and jam.

“With Blow By Blow, everything was feel with [drummer] Richard Bailey and myself,” Chen said. “I don’t play odd time signatures; I just tried to feel it. I used to play what I thought was right, and it wouldn’t be correct, but it would suit me because I couldn’t play all the different notes. You don’t have to have great technique if you can feel. The chemistry was right. To me, it was like a session, and I didn’t realize what we were doing, historically, at the time. I was listening to Michael Henderson, a monster bass player. He took Jamerson and moved it up the neck. He went onto A Tribute To Jack Johnson by Miles Davis, which I was listening to for ‘Freeway Jam.’”

Chen played bass on the first reggae version of Neil Diamond’s “Red, Red Wine,” by Tony Tribe, later a #1 hit for UB40. Bernie Larsen remembers, “I brought Phil to meet the UB40 guys, and no one in the band could speak because they were awestruck.”

Larsen and Chen were bandmates in David Lindley’s El Rayo-X and Cry On Cue. Bernie says, “It was like a reggae master class driving with him.”

But Chen didn’t view himself as a “reggae bassist.”

“I grew up with that feeling, and I can play it,” he said. “That’s a foundation, but I can play rock and roll, anything really. Reggae is something you don’t play on the beat; it’s a feel. There are so many great reggae bass players – Clifton ‘Jackie’ Jackson, Clive Chaman, ‘Family Man’ Barrett.”

Following Jamerson’s example, Chen used heavy-gauge LaBella flatwounds (“like rope”) and rarely if ever changed them. “Rotosounds, you have to change, but LaBellas, the older the better,” he said. “I’ve got a ’51 slab P Bass, and I think it came with those strings; I never changed them.”

“What a musical spirit,” Larsen added. “Playing was a celebration of self and others, bringing joy to people’s lives.”

But Glaub gets the last word.

“Thank you, Phil, for being a servant and ambassador to the music; it was infectious. Your work is done, and your spirit is alive.”