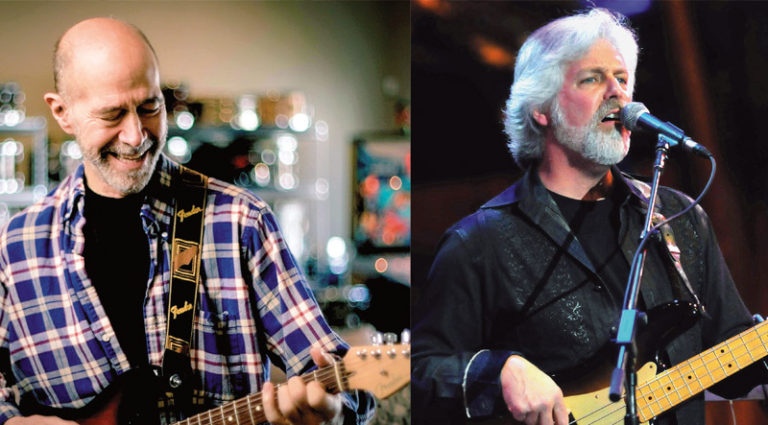 In the ’70s, the guitar-driven melodic rock of Orleans was all over the radio, with hits such as “Dance With Me,” “Still The One,” and “Love Takes Time” carried by tight harmony vocals and Allman-influenced guitar leads by John Hall and Larry Hoppen (1951-2012). Thanks to Hall and longtime bassist Lance Hoppen, the group stayed busy in the midst of a pandemic.

For decades, Hall’s primary guitar has been a stripped-finish ’56 Strat he bought in 1973.

“I’ve played it on most of my recorded work,” he said. “I’ve changed tuners, frets, and a couple of corroded bridge pieces,” he said. “I also changed the original switch to a five-way.”

Likewise, Hoppen’s longtime frontline bass was a ’58 Precision bought at a shop in their native Woodstock in ’75.

“The back finish is completely gone, as is the finish on the bevel, worn from sweat at scores of two-to-three-hour club gigs and concerts,” he said. “It has a strange gouge above the pickguard that grew deeper over time, and for which I have never had a good explanation. The neck has finger dirt imbedded both in the fretboard and in the rear, adding to its character.”

Both musicians still use their older instruments for recording, but modern Fenders are now their tools of the trade for concerts.

Like many other professionals, the band, which now also includes Hoppen sibling Lane on keyboards, as well as Fly Amero (VG, May ’13) on guitar and Brady Spencer on drums, was forced by the Covid lockdown to communicate musically via computer files as they put together a Christmas album, New Star Shining.

Lance recalled the logistics of the improbable Yuletide concept.

“We’ve never been the type to follow trends,” he said. “Once we decided to do this, we pitched songs to each other and wound up with this diverse set of 12. Some are internally written or co-written, some are covers, some had been previously recorded and were amended or left as-is. Some were started from scratch.”

The title track, written in the mid ’80s by Hall and his then-wife Johanna, was as-is except for remastering. First recorded in ’86 as a duet by Ricky Skaggs and James Taylor, Orleans recorded its version in ’94 for a holiday anthology released only in Japan.

One song that acquired modern musical upgrades was “Quiet Place,” which Hall recorded in the ’90s for one of his solo albums.

“It was a very sparse arrangement,” Hoppen said of the original. “Just lead vocal, acoustic guitar, a little synth pad and bass, and John Sebastian on harmonica. In my head, I heard a much bigger production, with robust background vocal. I had to sing all the parts; I sent it to John for discussion, tweaking and ultimately, approval, then sent those parts out to Lane, Fly, and even Brady. But more than that, I had this idea for drums and percussion, utilizing four marching snare drums, congas, and a full kit. Because the track is not at all metronomic – by design – each part had to be carefully layered on top of each other.”

“I Wish I Could Have Been There,” “I’m Comin’ Home For Christmas,” “Snowed In With You” and a cover of the Little River Band’s “Mary’s Christmas” are new recordings.

“I’m particularly fond of ‘I Wish I Could’ve Been There,’” said Hall. It’s a collaboration between Johanna and me, along with our friend Tad Richards, a lyrical whiz from Saugerties/Woodstock. Tad helped finish the vision of a farmer leaving his warm house and family to care for a newborn lamb. Musically, it’s a tribute to The Band, who were a major inspiration to us. [Little Feat’s] Bill Payne plays piano and John Jorgensen plays mandolin.”

Also included as a memorial tribute is a cover of “Winter Wonderland” by Larry Hoppen.

“I think I speak for all of us when I say we’re very pleased with the results, especially given the way in which we had to do it,” Lance said. “It was a journey into new skills for all of us.”
Orleans is planning recordings and events to mark its 50th anniversary this year.