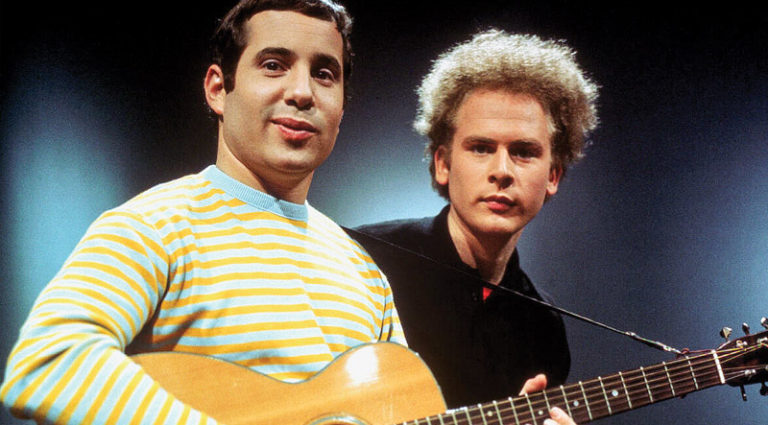 Troubadours – poet/musicians active in Europe in the 12th and 13th centuries, played a defining role in Western civilization. The original singer/songwriters, their trade was telling stories of popular culture and courtly romance, some intellectual and heady, others humorous and bawdy, accompanied by simple monophonic music. The dictionary further defines troubadour as “a wandering minstrel,” a descriptor that certainly fits Paul Simon.

Paul Frederic Simon was born October 13, 1941. His father, Louis, was a professor/bassist/bandleader, and mother, Belle, a schoolteacher. The family lived in Queens and was typical of new Americans who prized music and baseball in their quest for assimilation. Paul developed a passion for folk, jazz, and blues – particularly Woody Guthrie and Leadbelly – and as a young man acquired enviable fingerstyle guitar technique. At 11, he started singing with schoolmate Art Garfunkel, who was especially fond of Everly Brothers’ music. Simon was 12 when he wrote his first song, “The Girl for Me.” By ’57, they were performing as Tom & Jerry, and recorded “Hey Schoolgirl,” which reached #49 on the pop charts. They toured, appeared on “The Dick Clark Show,” and during the folk boom maintained a presence in Greenwich Village coffeehouses like the Gaslight, Bitter End, and Folk City.

Simon wrote more than 30 songs in this period, moonlighted with Tico and the Triumphs, adopted the pseudonyms Paul Kane, True Taylor, and Jerry Landis, worked as songwriter/producer for other labels, and cracked the Hot 100 (as Landis) in ’62 with “The Lone Teen Ranger.”

In ’64, they re-formed as Simon & Garfunkel, and made their Columbia Records debut with Wednesday Morning, 3 AM, a folk-oriented acoustic offering that sold poorly. Its failure to chart prompted Simon to move to England to continue his solo career. Meanwhile, in America, folk morphed into folk rock and captured audiences thanks to the Byrds and Bob Dylan’s electric transformation. S&G inadvertently joined the movement in ’65, when producer Tom Wilson overdubbed drums and electric instrumentation on “The Sound of Silence,” the audition song that clinched their Columbia deal. The result was a breakthrough single that captivated college crowds, dominated FM radio, became a #1 hit that December, and competed for supremacy with the Beatles’ “We Can Work It Out.” The reworked track set a tone, opening the program of their second album, Sounds of Silence (January ’66), which brought another hit single with “I Am a Rock” and featured “Anji,” a Davey Graham folk-guitar instrumental demonstrating Simon’s fingerpicking expertise. Studio contributors included guitarists Glen Campbell, Joe South, and Fred Carter, Jr., as well as drummer Hal Blaine, keyboardist Larry Knechtel, and bassist Joe Osborn of the Wrecking Crew. 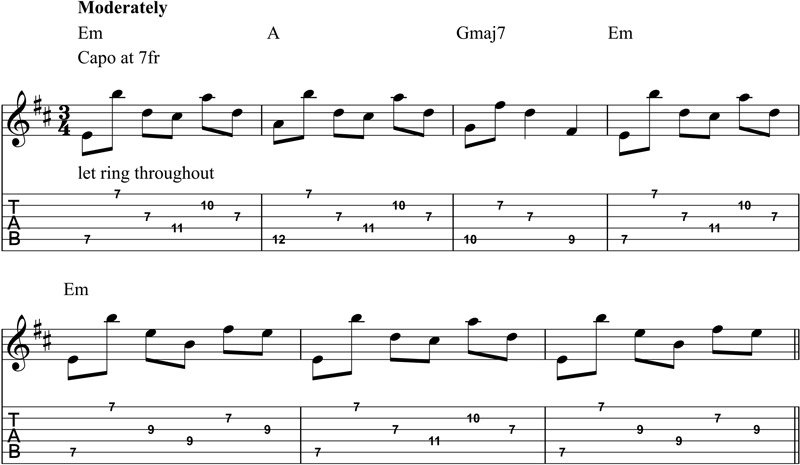 This classic Simon figure introduced “Scarborough Fair.” Capoed at the seventh fret, it has a distinctly modal sound that befits the mood made more atmospheric with attractive dissonances, suspensions, and the 3/4 meter. Notice the C#, D, and A added to a simple Em chord in measures 1 and 4, along with D and B added to A in measure 2. The arpeggiations are telling examples of his modified-folk picking style and generate cascades of ear-catching sonorities.

Simon exerted greater artistic control while recording the more-diverse program, which incorporated harpsichord, organ, piano, double bass, harmonica, and spoken word; the efforts of Blaine and South were augmented by bassist Carol Kaye, jazz drummer Joe Morello (“Take Five”) and other studio denizens. “A Hazy Shade of Winter,” penned in London in ’65 and recorded during the sessions, was issued as a single.

April of ’68 saw Bookends, a concept album dealing with life’s journey from childhood to old age that placed them in the ranks of the Beatles, Stones, and Dylan – and at the forefront of the counterculture following an appearance at the Monterey Pop Festival. Bookends was sophisticated, experimental, and textured, while Simon’s story lines, in spired by Sgt. Pepper, probed themes of youth, alienation, relationships, love, and mortality. Distinguished by “A Hazy Shade of Winter,” “At the Zoo,” “Fakin’ It,” “America” and “Mrs. Robinson,” Bookends established S&G not only as producers, but as the world’s leading duo. Innovations included Moog synthesizer on “Save the Life of My Child,” strings, horn, xylophone, and Jimmie Haskell’s orchestration in “Old Friends,” Leslie-processed guitar on “America,” and jazz allusions in “Overs” and “Punky’s Dilemma.” Studio contributors included John Simon (no relation) on Moog and the indefatigable Golden Trio of Blaine, Knechtel, and Osborn.

To this day, debates rage over the status of Bookends versus Bridge Over Troubled Water, but any assertions are tantamount to hair splitting or applying similar standards to Rubber Soul and Revolver.

“Hazy Shade of Winter” revealed Simon’s rock/blues side with an aggressive, rhythmically driving riff that cycles through a Dm-C-Bb-A progression in the intro and choruses. He rendered the phrase in single notes as four slightly imitative motifs, one for each chord, defining the harmony with combinations of stepwise motion and arpeggio lines. Note the straight pentatonic melody in Dm contrasted by spellings of dominant-seventh ch ords over C, Bb, and A. Played on a 12-string capoed at the fifth fret, he used a thumbpick for a plectrum effect.

“Bye Bye Love” was recorded in November of ’69, and proved prophetic as S&G parted ways in ’70. Simon again pursued a solo career, releasing “Mother and Child Reunion,” “Kodachrome,” “50 Ways to Leave Your Lover,” “Slip Slidin’ Away,” “Late in the Evening,” and starring in a music-themed 1980 film, One Trick Pony. In ’87, he scored a Grammy for the cross-cultural mix of African rock, zydeco, and pop on Graceland. He and Garfunkel would occasionally reunite for events like a ’72 benefit concert for George McGovern, Simon’s TV hosting of “Saturday Night Live,” “The Paul Simon Special,” and a ’78 charity concert at Carnegie Hall.

By 1980, their individual fortunes had waned, and in September of ’81 the duo reunited for The Concert in Central Park, which attracted more than 500,000 people and an album that garnered double platinum.

STYLE
Simon boasts a diverse style informed by numerous genres and artists undergirded by his fingerstyle folk proclivities on guitar and banjo, as on “Last Night I Had the Strangest Dream.” Early on, he relied on two-finger picking to arpeggiate chords, using picks on his thumb and index finger, as heard on “The Boxer.” He freely modified Merle Travis’ alternating bass-note/chord-tone patterns to suit the melody in compositions, sometimes beginning on higher chord tones with fingers followed by thumb-attacked bass note. He added his middle finger (without fingerpick) to pick chords for a “cluster” effect, sounding notes together in keyboard fashion. He prized voice leading and textures in his accompaniment, and often pared chords into partial shapes, such as 10th intervals considered more essential and malleable. In “American Tune,” he reduced E major to only E and G# tones (root and third) and used its inversion G#/B to approach an Am chord. Variants and seemingly infinite combinations of fingerpicked chords and arpeggiated patterns are found throughout his repertoire, often decorated with stylistic hammer-ons and pull-offs. 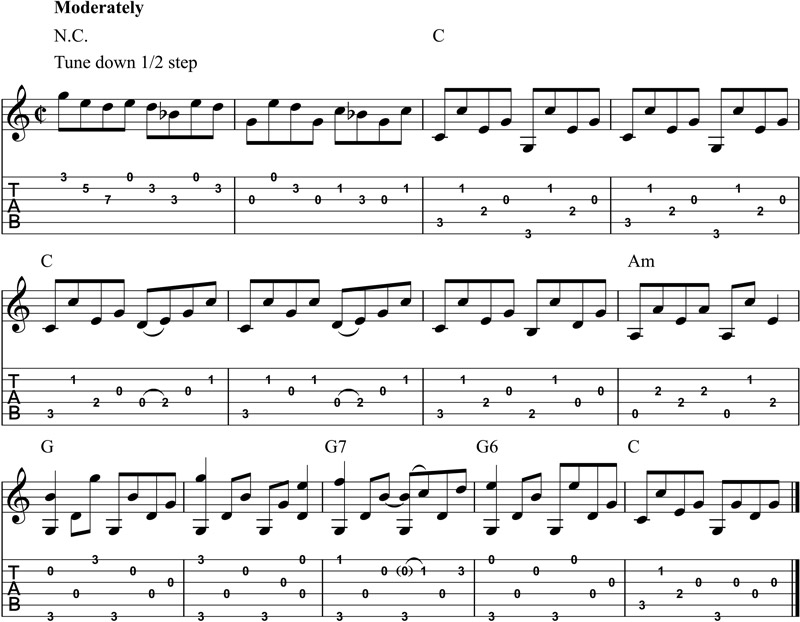 “The Boxer” was among the most memorable songs on Bridge Over Troubled Water. Its unusual intro was a highlight, employing an Eb-tuned Martin D-18 with overlapped lines by Fred Carter, Jr. on a 000-18 in alternate tuning (G-A-D-G-B-D) that allowed him to play A-major shapes in C that sound like open B. The first two bars are an arrangement of the opening phrase for standard guitar. In measures 3-10, Simon plays his Travis-picked accompaniment behind the verse.

Simon has a solid working knowledge of jazz harmony, bossa nova, and classical theory that enhances many of his compositions, like the Brazilian-inspired nylon-string chording on “So Long, Frank Lloyd Wright.” In addition to Travis-based fingerpicking and cluster articulation, Simon purveys a strong rhythm-guitar style with strummed chords and flatpicked lines, as in “Hazy Shade of Winter.” Check out his strummed grooves and the propulsive rock feel in “I Am a Rock,” “Mrs. Robinson,” and “Homeward Bound.” On his eponymous solo album in ’72, he stretched beyond folk-based trappings to feature swing-jazz timekeeping in “Hobo’s Blues” and blues-inspired guitar in “Armistice Day,” where he applied Open D, a typical rural-blues concession. He also sometimes tuned his guitar down a half or whole step; the former is heard in “The Boxer” and “Kathy’s Song.” He occasionally used a capo, as on “Scarborough Fair” (seventh fret), “April Come She Will” (first), “The Sound of Silence” (sixth) and “Hazy Shade of Winter” (fifth).

ESSENTIAL LISTENING
Best of Simon & Garfunkel is a serviceable compilation. A more thorough view demands Bookends and Bridge Over Troubled Water be included in full.

ESSENTIAL VIEWING
There are numerous S&G performances viewable online. Among the most noteworthy are “The Sound of Silence” and “The Boxer” from Central Park Concert, a ’66 performance on “The Mike Douglas Show,” and a host of vintage promo clips.

SOUND
In his early S&G years, Simon favored Guild acoustics, playing two custom F-30 Specials (one with electronics). Both had a smaller, thicker body, Brazilian rosewood back and sides, ebony fretboard, and Grover Rotomatic tuners. He also played a Guild 12-string with a 17″ body, inlaid ebony fretboard, and gold Grovers. Other instruments in his ’60s arsenal included a Guild bass, Martin D-18S, a 1925 Dobro, Standel electric, and a nylon-string Goya G20.