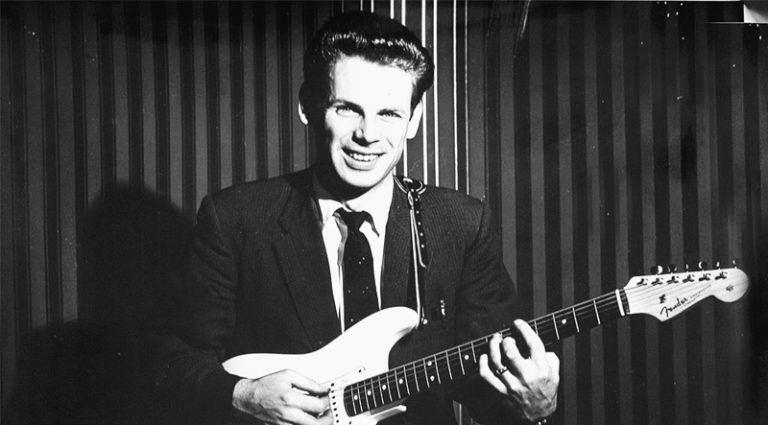 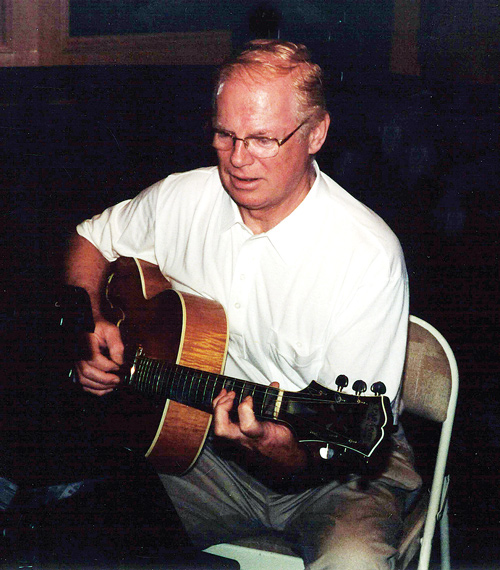 You may not know the name Vic Flick, but you know his signature motif–that reverby lick from the James Bond theme, recorded in 1962 for Dr. No, the first in the long-running film franchise. Flick played on every Bond smash through Diamonds are Forever, and even recorded with Eric Clapton on the latter-day 007 soundtrack, License to Kill. You can further hear the guitarist in the film scores such as Midnight Cowboy and The Return of the Pink Panther, as well as cult shows like “The Avengers” and “The Prisoner.”

Flick’s career, however, has not just been limited to visual mediums. In the swingin’ ’60s, he recorded with a veritable who’s who of pop royalty, including Beatles producer George Martin, Burt Bacharach, Herman’s Hermits, Henry Mancini, Jimmy Page, Cliff Richard, Diana Ross, and Nancy Sinatra. He played on pop smashes like Petula Clark’s “Downtown,” Dusty Springfield’s “I Only Want to Be With You,” and Tom Jones classics like “It’s Not Unusual” and “What’s New, Pussycat?” And before he found fame with 007, Vic played pre-surf instrumental rock with the John Barry Seven, led by the composer/arranger who’s name became synonymous with the Bond soundtracks. This lineup scored its own instrumental hit with “The James Bond Theme,” hitting #13 on the U.K. singles charts back in ’62. So while you may not know Vic Flick’s name, again, you’ve heard his guitar licks a thousand times, as have the millions of people who’ve enjoyed the Bond movies.
Today, Flick lives in Las Vegas, but the Surrey-born guitarist will always be associated with suave secret agents and Brit-pop hitmaking.

Who were your early guitar influences?
When I first picked up a guitar in 1951, there weren’t too many players to be influenced by, especially on the electric. But in the early years, I listened to Barney Kessel, Jim Hall, Wes Montgomery and of course, Charlie Christian. My greatest influence, however, was Tal Farlow. His interpretations, chord comping, and fluid musical jazz lines were an inspiration to me. I recommend younger readers to listen to The Swinging Guitar of Tal Farlow album and they will likely become inspired, too. “Like Someone In Love” is a great example of his playing.

What was your first electric guitar?
I studied piano from the age of seven until I was 14, when my father started a dance band. Not needing another pianist in the band, I acquired a small-bodied Gibson Kalamazoo for five pounds – a lot of money in those days. But I practiced like crazy and eventually joined the band. To make it louder, I attached an Army-issue tank commander’s throat mic to the guitar’s headstock and plugged it into my father’s radio. The sound was a bit louder, but certainly not quite up to the amplified sounds of today. Like an idiot, I traded in the Gibson for a dreadful banjo when I joined a trad-jazz (British dixieland) band.
My first actual electric guitar was a Höfner President I bought with the money I earned from laying concrete floors in a summer break. I was so proud of it, with all its decorative inlay and built-in electronics.

Describe a typical film or T.V. date in the ’60s.
Most of the time, musicians had no idea what artist or music a session was for until they got to the studio. And even then, not ’til they opened the pad on the stand. With titles like “3M2” and “6M4 ,” there was no indication of the production’s name. The level of musicianship needed for film and T.V. sessions was, and still is, extremely high, since you had to sight-read whatever was put in front of you. T.V. was more relaxed, as more preparation was necessary due to the visual side of the productions. But for musicians, if it was a T.V. series, after the first episode you could just sit back and enjoy.

Your work with the John Barry Seven pre-dated the instrumental and surf-guitar sounds that came a few years later, in the early ’60s. Who was the band listening to in the early days? Duane Eddy?
Duane Eddy, with his “Rebel Rouser” and other hits, were certainly an influence, as were tunes like “Peter Gunn,” composed by Henry Mancini. I had the pleasure of working with him several times. But mainly, I just played whatever was needed and developed my own style from there.

Do you have any recollection of the James Bond studio sessions at CTS Studios, in London?
Bondmania hadn’t taken off yet, so the Dr. No session where we recorded “The James Bond Theme” was just another session. The Bond producers had their backs to the wall, running out of time and money, so John Barry was selected to vamp up one of (composer) Monty Norman’s old show tunes. To give the Bond films a unique identity, we provided a strong, dynamic opening theme. As the films took off, the sessions had more excitement and atmosphere as we realized we were onto something good. I could have done without the times where John Barry pointed at me with an expectant look on his face! He was hoping I’d come up with something good on guitar, as I did in the scene when Pussy Galore’s lady pilots were landing in Goldfinger, and the Gypsy encampment scene in From Russia With Love.

You’ve said in the past that you had a fair amount of leeway in interpreting composer Monty Norman’s theme on guitar. Can you explain?
Monty Norman was commissioned to compose the music for Dr. No. As the film was located in Jamaica, Monty and the crew went off to the Caribbean. With a tape recorder, he recorded a few hours of local music, but it wasn’t dynamic enough for the Bond theme. So again, John Barry was asked to update a tune Monty had written for one of his shows, to create the theme. With my guitar sound and his brass arrangement, I think the result has proved itself. I overplayed the guitar to give the sound a bit of urgency and kind of pushed the beat a little to add to the excitement. The sound of the 007 theme was also a breakthrough in recording due to its technique. In the early ’60s, the orchestra would record only one take, using what the studios referred to as “compatible stereo.” This method allowed for the sound of the guitar to bleed into adjacent microphones of the orchestra, adding a lustrous, ambient quality to the final recording.

On that session, you used a guitar most U.S. players likely have never heard of – a Clifford Essex Paragon De Luxe.

The guitar is very English. Clifford Essex was a luthier and banjo builder who established himself in London in the ’30s. Though predominantly a banjo maker, he made some great guitars, mine being one of them. Guitars are built for the current styles and fashions, hence the success of manufacturers like Fender. My Paragon De Luxe was an excellent rhythm instrument and designed to be played in a dance orchestra. Its sound would complement the drums and bass, and cut through the wind instruments. Interestingly, when the great guitarist Chris Spedding came to London to make his fortune, his first job was workng at the Clifford Essex factory.

Your Essex was in the Rock and Roll Hall of Fame, and more recently was featured at the official launch of the National Guitar Museum.
Yes, it was on display in Cleveland for about three years, and the National Guitar Museum asked for the Paragon to be on show in its touring exhibition.
Some of your other gear included a DeArmond volume pedal and a 15-watt Vox amplifier.
In the studio, I rarely changed volume, as the sound man had all his knobs adjusted for the mix. Mostly, I used a DeArmond pickup through a DeArmond pedal and then into a Fender Vibrolux amp. I purchased the Fender amp in ’62, just prior to the Bond recording that June. There’s a picture of the amp and an original Maestro Fuzz Tone pedal in my book. I did have a 15-watt Vox at the time, but it fell off a stage.

Were you ever able to visit the 007 movie sets or meet Sean Connery?
The music sessions are amongst the last production elements completed, so the filming and set work was done long before I got involved. I do recall Sean Connery appearing briefly at one of our sessions. And once, actor Timothy Dalton enjoyed sitting at the bar in CTS Studios talking with us musicians. I don’t remember any of the other Bonds joining in.

In the Beatles film A Hard Day’s Night, you played on “Ringo’s Theme” using a ’62 Strat and Vibrolux amp. By that time, was Fender gear coming into popularity in the U.K.? Was it because of Hank Marvin?
Following an endorsement policy by Jennings Music – the importer of Fender products – Strats and other Fender guitars were being used more in the U.K. Macari’s Musical Exchange, in London, was the outlet for Jennings Music, and Fender, and they gave Hank, myself, and a few other guitarists new Stratocasters. Hank, through his work with Cliff Richard and the Shadows, was more well-known than other players, so most people think he was the chosen one. I was given my Strat in 1960, only to have it stolen at the beginning of ’62, which is one reason I used the Clifford Essex on “The Bond Theme,” and I’m glad I did. Later that year, however, I purchased another Strat for $250 with the insurance money.

You played on big ’60s hits for Dusty Springfield, Shirly Bassey, Petula Clark, and Tom Jones, plus you also worked on various B.B.C. television themes. Any special studio memories of those days?
In my humble opinion, the ’60s and ’70s were the best time to be in the recording industry. It was a period of innovation, excitement, a lot of work, and a great sense of camaraderie amongst the studio musicians. A great thing was that artists, musicians, and production staff were friendly, equal, and just interested in getting the best possible out to the public. For example, I had known Dusty for some time before she became a star, and she was always professional and passionate about her performances. Pet Clark was more on the demure side, but both were excellent singers. We had a lot of fun on the Tom Jones sessions, especially when “imported” video entertainment made the sessions even more interesting. The TV themes were recorded in a more formal and business like fashion by the B.B.C.

Do you ever get tired of playing the James Bond riff?
The reception I get whenever I do play it far outweighs the drudgery of repetition. I’m grateful to be part of the James Bond world, having had no idea at the time that those few notes I played in 1962 would follow me down through the years.

Special thanks to H.P. Newquist.