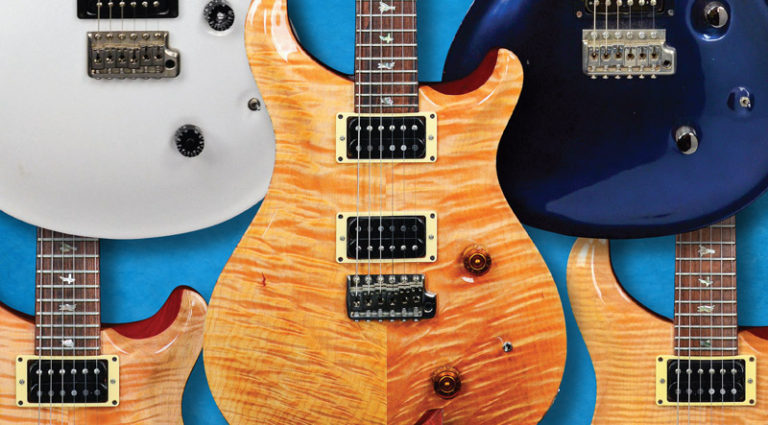 Sammy Ash first laid eyes on a PRS guitar in the early ’80s, after catching a glimpse of one in Guitar Player magazine.

“I stopped at the newsstand to look at it because Jeff Beck was on the cover,” he said. “Paging through, I flipped past a column on ‘exciting new builders’ entering the mainstream guitar market. There was some guy named Seymour Duncan talking about pickups, and a wild-haired, wide-eyed kid named Paul Smith. Okay… next.”

Fast-forward to 1984: Ash is living in “exciting times” as the guitar/amp/effects buyer for his family’s six-store East Coast chain, Sam Ash Music.

“My job was to keep us stocked with all the latest and coolest gear from builders big and small, and we were very progressive with new lines,” he said, citing their early adoption of instruments from Alembic, Veleno, Ibanez, B.C. Rich, Jackson, Charvel, Hamer, Valley Arts/ESP, Orange, and Mesa Boogie. “I remember placing the 32nd order with John Page at the inception of the Fender Custom Shop.”

One day while he was at home, bedridden with double pneumonia, the phone rang…

“I get a call from Ralph Perucci, one of my guitar salesmen in the White Plains store, and he’s kinda excited,” Ash said. “He tells me, ‘I’ve got this guy here, Paul Smith, and he brought some guitars to show us. I really think you should see these.’ I thought, “I know that name, but from where?’ But it was a new builder, with new guitars, and if I’d had an ounce of breath to walk or drive a car, I would’ve been there in a heartbeat. But that wasn’t happening. So I told Ralphie, ‘Put him on.’

“Wheezing and with my raspy voice – picture a heavy New York accent and low, gravelly tone that made me sound like a mobster – I said, ‘Hi Paul. I hear you’re doin’ it right, but I can’t meet ya’. You need to see my brudda Richie, in the City. You go see Richie.’

“After hanging up the phone, I was deathly afraid he’d walk into Manny’s Music,” Ash said. “But it turns out he had already been there and had a not-so-good interaction with Henry [Goldrich, founder of Manny’s].”

Instead, Smith did as his new guitar godfather asked, and went to see Richie.

Smith picks up the story from there.

“Richard loved the guitars, and told me, ‘I’ll buy 12,’ which immediately made me very happy. But then he added ‘…for all six stores, every two months.’ I was flabbergasted, and left with a 250-guitar purchase order worth $250,000, which was half of the POs I’d gathered on that trip.”

Smith happened to be looking for money to start a guitar company, and the order provided proof of market potential to show prospective investors.

“Until that point, my largest PO had been $6,500,” he added. He and Sammy met soon after, and became close friends.

The first PRS shipped to Sam Ash Music carried serial number 5 0006, and after it arrived, Smith called Ash, telling him to buy it for his personal collection because, “It’s a good one.”

“He was right – it is!” Ash said. Later, fortunate timing led him to acquire one with an even lower number.

“I called their shop to ask about getting a better case for number six, and the woman who answered (Ed. Note: Smith says it was likely Bonni “Pink” Lloyd) asked, ‘Are you interested in number four? Someone returned it, so it’s for sale.’ Again, I muttered ‘What?,’ then yelled ‘Sold!’”

Meanwhile, back at the White Plains store, a prototype that Smith had left was being used as a floor demo. One employee was even gigging with it.

“Once I learned that was happening, I took it home,” Ash chuckled. “It was still in pretty good shape.”

In 1988, Smith sent two Japanese-made prototypes to White Plains for his friend’s evaluation – one that looked like a PRS Standard and another more like a Stratocaster.

“He eventually asked me to send the Strat-shaped one back, but he forgot about the Standard, so I glommed it,” Ash said. “He really hates the fact that it exists, and rightfully so, as it’s not a great instrument. But it’s now the only one because Paul cut the necks off the others. For a fun surprise, I took it to his 40th-birthday party, where many of the early PRS crew signed the back.”

Another top piece from Ash’s collection is a 1986 Signature series guitar that was a gift from Smith, who signed the front of the headstock and wrote “Sam Ash #2” on the back.
“It’s the second one made,” Ash said. “Paul’s son, Sam, owns #1.”