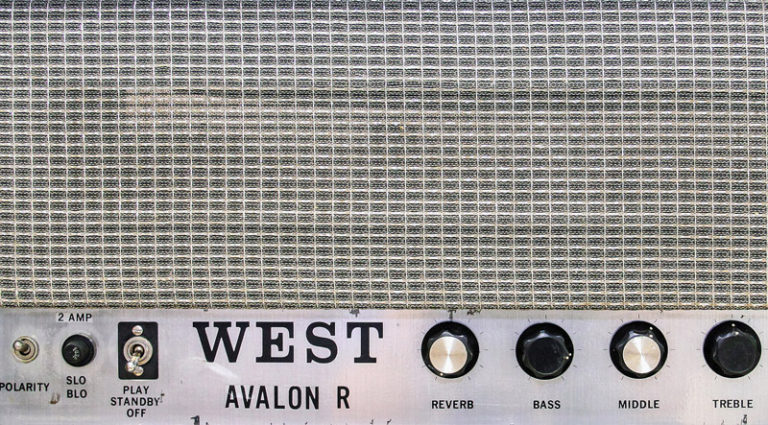 Only a handful of amplifier makers from regional markets have burst onto a national scene. Greater success usually requires two things – a solid product and a star client. Dave West had both, and at one time his mammoth creations were headed for wider recognition.

It’s not terribly unusual for an entrepreneur to see a gap in a market and “borrow” a design to fill demand. Typically, the move includes a pledge to make something better (or at least bigger, more powerful, or more affordable). In the early ’60s, that formula launched Jim Marshall’s amp business in west London, followed a few years later by Dave West in Michigan. Both based their designs partly on reputable Fender models – Marshall imitated the tweed Bassman, but built his way, while West copied black- and silverface models and built them very much like Fenders. The approach was also shared by the makers of Sunn amps, which were briefly popular in the day, and the similarities ally West with that company’s approach.

The quest among amp manufacturers looking to supply the growing professional market was bold, clean power that could segue into massive crunch and singing lead tones once cranked up or pushed with a fuzz or booster pedal in front. West’s larger, mid-’60s American platforms aimed at exactly that, and rendered them in a straightforward manner, but with massive Dynaco power and output transformers that gave him exactly what he needed to fulfill demand in the booming rock scene of south and central Michigan in the late ’60s (the ultimate “American Band,” Grand Funk Railroad, took West’s mightiest model on the road).

Like many would-be amp makers of the day (and Leo Fender in a record store two decades before), West began as a storefront hi-fi retailer in Flint. Perceiving a demand for the performance side of tube audio just as Michigan was forging a reputation as one of the preeminent heavy-rock scenes in the country, he formed West Laboratories in 1966, then moved to Lansing and began making three models.

While noted as offering specs and controls much like 50- and 100-watt Fenders (a line Sunn was clearly aiming to elbow in on), a deeper look reveals a departure into the kit-amp world, reinforced by our featured amp.

An avid supporter of the local music scene, West accepted an offer from guitarist Dick Wagner (later of Alice Cooper’s band) to look inside a Sunn head. What the hi-fi enthusiast found was a cobbling of a Dynaco kit preamp and power amp stages, which themselves had many similarities to the Fender topology of the day. With that exploratory mission under his belt, West figured he might as well make the things himself.

Make no mistake, Sunn and West amps could sound massive and utterly rocktastic, but the circuits were simple and not particularly original. That, and they were put together in a way that resembled kits of the time, albeit with quality components and hefty transformers.

A peak inside the chassis of this 50-watt Avalon R reveals tidy workmanship. The circuit comprises four individual turret boards for different stages, and components strung together with a network of flying wires – all competently handled, yet giving the impression that the chassis, circuit, and overall design were not necessarily conceived all a-piece. None of this is a knock – these West creations are rare and relatively desirable in and of themselves – but just part of the fun of exploring lesser-known brands.

In addition to the hefty Dynaco transformers on the outside, the internal components include a lot of stuff that was standard for the era, all of good quality; Sprague “orange drop” signal capacitors rule the roost, along with mostly carbon-comp resistors. One quirk is the Telecaster-style blade switch employed as the output-impedance selector. Sure, it offers positions for 4-, 8- and 16-ohm outputs, but it really wasn’t the best choice for this application. As on some other amps, the outputs have been rewired to a more robust “coin slot” rotary selector, as used on many British amps of the ’70s, fitted into a hole for the accessory AC outlet.

This amp differs from the majority of West builds with its tube-driven reverb circuit.

That means it carries twice as many preamp tubes; where the standard model used a single 12AX7 for its two drive stages with the EQ between and a 12AT7 for the phase inverter, the Avalon R carries two of each. Otherwise, this Avalon R also differs from the Fender template in its use of a pair of EL34 output tubes. West was aware of their contribution to the sound of the Marshall heads that were so popular at the time, and they helped further differentiate his own design.

The other two models in West’s lineup reverted to American-made output tubes to deliver their firepower: the Grande and Fillmore carried two and four 6550s to produce 100 and 200 watts, respectively. And if you see a theme running through the model names, it’s worth noting that West sought to be a one-stop shop, managing and promoting bands in addition to building their amplifiers. The Avalon and Fillmore were popular San Francisco venues of the day, while the Grande was a Detroit ballroom that frequently hosted Grand Funk, the MC5, the Stooges, and other major acts. And for those gigs, nothing but the blistering 200-watt Fillmore would do.

West left his company in 1972, after signing over the brand name (initially, it seems, in aid of wider distribution) to a company that, in his view, cheapened the manufacturing process and eventually segued into solid-state production. After parting from the amp business, West continued to run a music store in Lansing, then had success in the computer industry. He continued to build guitar amps on the side, and his son, Aaron, tells us he was looking to get back into the business before his death in 2015 at the age of 71. A testament to his achievements, the amps he created in the late ’60s and early ’70s – mildly derivative or otherwise – are still rocking, rolling, and kicking out a lot more volume than most of today’s venues will tolerate.