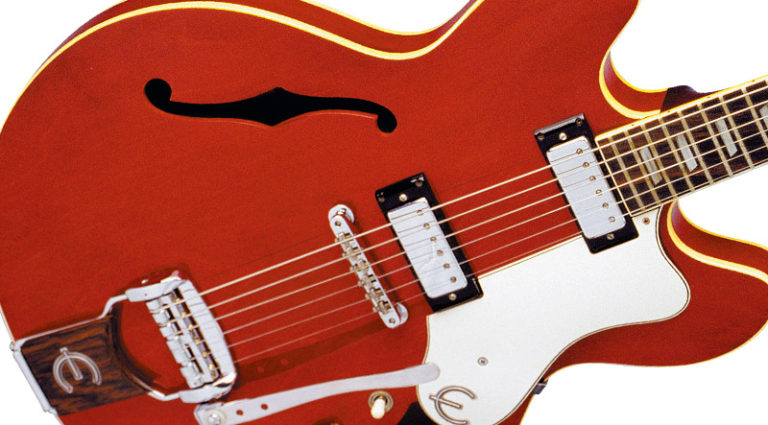 The Epiphone Riviera helped reinvent Epiphone in the 1960s as a modern guitar company whose instruments sported such contemporary features as thinline, semi-hollow, double-cutaway bodies and humbucking pickups.

In the minds of older guitarists, Epiphone was a traditional New York-based company, with roots in 19th-century Greece, that came into prominence with tenor banjos in the Jazz Age and challenged Gibson in the archtop and electric market of the 1930s. In the minds of younger guitarists of the late ’50s, however, Epi barely existed. The company floundered after World War II due in large part to the death of founder Epi Stathopoulo in ’43, and it was virtually dead when Gibson’s parent company, Chicago Musical Instrument Company (CMI), acquired it in ’57.

Although the reason for the acquisition was to give CMI/Gibson the capability of producing acoustic basses, Gibson president Ted McCarty recognized an opportunity to create and exploit what was essentially a second Gibson brand. McCarty drew up a new line of Epiphone guitars and debuted them in 1958. His electric archtops represented an abrupt departure from Epi’s past; four of the five new models were thin-bodied, a style Gibson had offered since ’55, but Epi had never done. And one of the new Epis – the Sheraton – was a semi-hollow double-cutaway, a style Gibson was introducing concurrently under the Gibson brand as the ES-335.

The semi-hollowbody design gained immediate acceptance, and Gibson expanded the offering with the more-ornamented ES-355 (later in ’58) and midline ES-345 (’59). On the Epi side, however, the Sheraton was a fancy model – the equivalent of the ES-355 – so the expansion went in the opposite direction. The new model was introduced in ’62 and dubbed the Riviera. (Another semi-hollow Epi, the Professional, was also introduced in ’62, but it was in a class of its own, with guitar-mounted amplifier controls, requiring its own specially designed amplifier.)

Some of the original Gibson-made Epiphones featured Epi-style necks (either leftover or newly made by Gibson) and Epi’s “New York” pickups, which resemble humbuckers with the polepieces offset from the center, though they are single-coils. By the time of the Riviera, however, the makeover of Epiphone was complete. This example illustrates the distinctive Epiphone peghead shape – more curvaceous than Gibson’s, but with Gibson’s “dove-wing” top edge design. The single-parallelogram fingerboard inlay pattern is also distinctly Epiphone and is shared by the double-cutaway fully hollow ’62 Casino (although it does show up on occasional ES-335s in the ’60s). The pickups are humbuckers, but in order to keep the Epiphone line slightly below Gibson in status and sound, Epiphone humbuckers were slightly smaller. Consequently, they’ve become known as mini-humbuckers. Although they’re not as desirable as the full-size versions, Gibson did think enough of them to make them standard equipment on the original Gibson Firebird line and Les Paul Deluxe model. The vibrola on this example, which became available as an option in ’67, is unique to Epiphones; the strings wrap around a shaft with a graduated diameter to compensate for different string diameters.

As if those features weren’t enough to distinguish the Riviera from a Gibson, the pickguard and the tailpiece insert sport the stylized upper-case E from the Epiphone peghead logo. It’s actually a lower-case version of the Greek letter epsilon, which ties in this modern instrument with Epiphone’s roots. The shape of the pickguard, too, is inspired by traditional Epi archtop pickguards and is different from the standard Gibson issue.

In other respects, the Riviera is the same as the Gibson ES-335 in workmanship and design. Unfortunately, though, while the ES-335 continued through Gibson’s Norlin years (1970-’85) and into current production, the Riviera went away with the entire Epi line when Gibson sent Epi production to Japan in 1970. (It reappeared briefly in 1982 and came back for good in the early ’90s, and is still produced overseas.)

While 1960s ES-335s bring double or triple what a same-year ES-330 would bring, the Riviera has not maintained the same relationship with the Casino (except as new models in the current Epiphone lines). In fact, vintage Casinos bring more than Rivieras, and the reason is simple: the Beatles played Casinos. Not only has their indentification – in particular that of John Lennon – with the model made vintage Casinos more valuable than Rivieras, it has also made Casinos more valuable than equivalent Gibson ES-330s.

It is only by the fickle finger of fate that the Riviera sits today in the shadow of the Casino. After all, the Beatles surely would have been perfectly satisfied with Rivieras. The Riviera’s similarity to the ES-335 makes it, in our opinion, a “sleeper” in the vintage market. While it is not wise to expect the vintage market to behave in an orderly manner, it is reasonable to view vintage Rivieras as undervalued, with excellent future investment potential, since they are currently available for significantly less than an equivalent ES-335 and less even than many new guitars with similar appointments.

This article originally appeared in VG‘s December ’05 issue. All copyrights are by the author and Vintage Guitar magazine. Unauthorized replication or use is strictly prohibited.