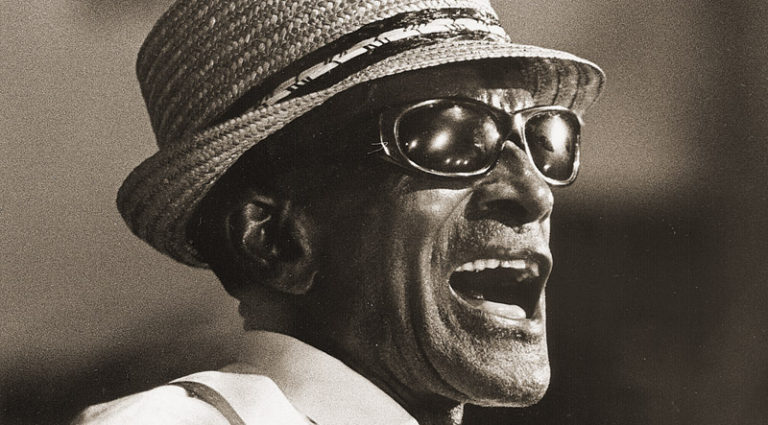 Steve Buscemi’s depiction of a socially challenged record collector in the movie Ghost World is not inaccurate – at least in a lot of cases. Let’s face it, record collectors can be nerds. But it was record collectors who brought blues artists to the masses. And would you believe the most important epicenter for reviving the blues in the early ’60s was not Chicago or Memphis, but Maryland and D.C.?

I’ll explain. But first, I need to shine a light on the new documentary Memphis ’69, about that year’s Memphis Country Blues Festival.

It’s astounding to look back on the roster of artists featured that year – filmed by Adelphi Records founder Gene Rosenthal. With a five-camera crew, he shot more than 40,000 feet of color film – approximately 20 hours – and spent his entire budget to have it all developed, then had to sell his cameras and leave the movie unfinished.

Thanks to an arrangement with the Fat Possum label, a 72-minute documentary highlights performances that would have been lost to time.

Billed as a country blues fest, electric acts were included, no doubt to help draw crowds. After Rufus Thomas kicks things off with “Walkin’ The Dog,” gruff-voiced Bukka White bottlenecks and spanks his steel-bodied National on “Aberdeen Mississippi Blues.” Later, he sings “Parchman Farm Blues” while playing bottleneck behind his head. Try that sometime!

Next is the blind bluesman Nathan Beauregard playing a Kent electric guitar, of all things. An elderly man born in the 19th century, he’s far from the strongest performer, but thank God he was captured on film because he passed away one year after this appearance. In fact, all of the film’s performers are deceased now, so thank you, Mr. Rosenthal!

The cheap guitar trend continued with Son Thomas, who tells the audience, “I got so nervous, I can’t hardly play nothing tonight,” before launching into a blistering rendition of Elmore James’ “Standing At The Crossroads” (not to be confused with the Robert Johnson song). It’s hard to imagine any brand-name guitar sounding better.

The same goes for one of the many manufactured bottlenecks improving on the sound Lum Guffin gets using a pocket knife on “Jack of Diamonds.” And Sleepy John Estes, playing some Teisco variant with longtime partner Yank Rachell on mandolin, is particularly noteworthy for including “You Shouldn’t Say That,” which he recorded with the Delta Boys jug band in 1941.

England’s Jo Ann Kelly was virtually unknown to American audiences, so her deep vocals and masterful slide were a revelation. With “Backwards” Sam Firk accompanying, she transposes Son House’s “My Black Mama” to “My Black Papa.”

After Memphis legend Furry Lewis, who got one of the biggest ovations, blues-rock band Moloch delivers a spirited “Leaving Trunk,” featuring unsung guitarist Lee Baker. Then Johnny Winter shows why he was such a sensation when he hit the scene. In a soulful version of Percy Mayfield’s “Memory Pain,” he effortlessly covers every inch of his Fender Mustang.

Mississippi Fred McDowell closes the festivities, playing his Italian thin-body Crucianelli electric. So, the only guitar shown that could be now deemed collectible was Lee Baker’s sunburst Les Paul.

Though witnessing so many blues legends in a festival setting isn’t the same as seeing them in some Mississippi juke joint, Memphis ’69 is almost like stepping back in time to see Elvis on “Louisiana Hayride” or James Brown at the Apollo.

So what’s all this have to do with record collectors and Maryland? During the Folk Boom of the late ’50s and early ’60s, thanks to research and happenstance, collectors located blues artists thought to be long gone, and brought them to coffee houses and college campuses. Tom Hoskins and Dick Spottswood found Mississippi John Hurt thanks to a line in an old recording, “Avalon’s my hometown.”

In the case of Canned Heat’s Al Wilson and Henry Vestine, collectors became rock stars. There were other important folklorists, like Chris Strachwitz and George Mitchell, but Wilson, Vestine, John Fahey, and other collectors lived and/or went to college in the Maryland/D.C. area, as did Rosenthal.

“I can’t tell you how blessed and how lucky I am,” the gregarious 78-year-old told me. “Right place, right time. I built a small studio in my parents’ house and the first recordings I did, in 1963 and ’64, were John Fahey, Mississippi John Hurt, and Skip James. What the hell!”

The goal of such collectors was not to make a fortune; indeed it often cost them money. Their aim was to expose large audiences to wonderful blues artists. In turn, they gave artists careers many had never experienced. It’s no exaggeration to say that without people like Gene Rosenthal, there may well have never been a blues revival.