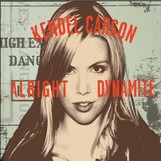 Kendel Carson may have titled her debut Alright Dynamite, but from the way guitarist John Platania’s graceful intro eases the ear into to its opener, “Baby Lay Down,” it’s clear Carson’s heat is more smoldering than explosive.

Like Roseanne Cash, Carson has a subtle but kitten-ish approach which only works when one has the goods to back it up; the sultry ballad “Baby” proves she does. And she follows through with the more uptempo “Belt Buckle.”

Carson is a fiddle player, and there’s an alt-country character to her music, almost a throwback to the left-of-center country of Merrilee “Angel Of The Morning” Rush. No surprise, though, given that Chip Taylor produced the CD and plays acoustic guitar. Platania’s Scotty-Moore-like echoes, in tandem with Carson’s fiddle on “New Shoes” (and his rockabilly rumbles on “Mercedes Benz”), remind the world that his contributions – here there and everywhere – are as welcome as a pay raise.

Pieta Brown – One and All