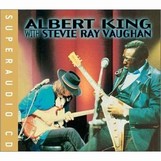 Hard to imagine that the only way this album was put back in print was by Concord re-releasing its Stax back-catalog.

Shot in late 1983 for a Canadian television show, Vaughan was at the time mostly known for his playing on David Bowie’s Let’s Dance album. He and King met years earlier, and the story makes up one of several entertaining asides featured between cuts here.

Guitarists, while they might enjoy the small talk, will really enjoy the playing. Both players bring their A-game as they zip through songs well-known and not so well-known. Slow blues like “Call it Stormy Monday” and King’s classic “Blues at Sunrise” are textbooks for players who want to learn how to play the blues. Even at 15:10, “Blues at Sunrise” never disappoints and never is boring. Funky uptempo blues numbers “Don’t Lie To Me” and “Ask Me No Questions” showcase both guys’ heartfelt attraction to the rockier side of the blues.

Vaughan’s only vocal, his then-new “Pride and Joy” gets a small-but-definite makeover with a slight change of tempo. It’s more relaxed than his studio version, and both shine on rhythm and lead.

Throughout the album, it’s obvious who is the teacher and who is the student, but both have an obvious affinity for each other.

Chris Whitley and the Bastard Club – Reiter In