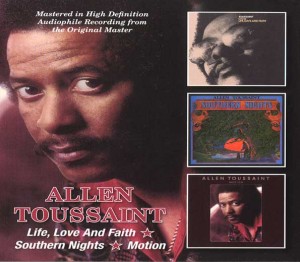 Think of New Orleans rock and roll and R&B, and icons such as Fats Domino, Professor Longhair, Dr. John, the Meters, and the Neville Brothers come to mind. As songwriter, producer, arranger, or pianist, Allen Toussaint was involved with all of them. When he died last year at age 77, it wasn’t just the Big Easy’s loss, it was the music world’s.

The three albums in this two-CD package span 1972 to ’78, featuring Toussaint in the role he was least comfortable with – solo artist. His strength as a pianist was undeniable; he expanded on the Longhair tradition and “played” Fats Domino on some of Fats’ records. And modesty aside, he was an excellent, understated vocalist.

The first two albums feature colossal bassist George Porter, along with drummer Zigaboo Modeliste and guitarist Leo Nocentelli. The latter added organist Art Neville to complete the Meters’ lineup. Like much of New Orleans funk, it’s not about soloing; interplay is all-important.

Southern Nights, Toussaint’s masterpiece, was cut at the hit-bulging Sea-Saint studio with Marshall Sehorn co-producing. Motion, featuring the classic “Happiness,” was produced by Jerry Wexler in L.A., with players from Stuff, Toto, and the Crusaders. Bass legend Chuck Rainey brings the funk, and Larry Carlton’s tasty guitar is immediately identifiable. If Toussaint was out of his comfort zone, it doesn’t show.