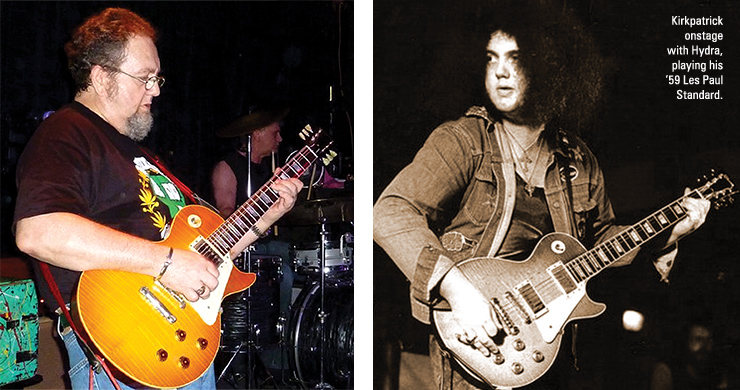 In the ’70s, Hydra was a Southern-rock band that owed more to the heavy British blues of Cream and Free than Skynyrd. Its secret weapon was lead guitarist Spencer Kirkpatrick, a player whose licks led the band through three LPs before it disappeared. Today, Spencer continues to gig while working at Atlanta Vintage Guitars.

Before Hydra, your high-school band opened for the Beatles in 1965. How did that transpire?
The Atlanta Vibrations won a battle of the bands contest and the grand prize was an Vox AC15 and the opportunity to open for the Beatles. No one bothered to tell [Beatles manager] Brian Epstein that a local band had been added to the lineup, and he was going to cut us. But John Lennon’s Vox organ was damaged in transit, so we let him use ours. If that hadn’t happened, we’d never have been allowed to play. The only stipulation was that we couldn’t do any vocals, so we did instrumentals of Ventures and Beatles songs. The date was August 18, 1965, and I was all of 15 years old.

Who are your influences?
Early on, I loved the Beatles, Chet Atkins, and James Burton. We dug the British Invasion bands, but living in the South, our band was just as likely to play Otis Redding or Buck Owens; we tried to absorb it all. Being from Atlanta, Duane Allman was a big slide influence on everybody. I loved his playing, but never wanted to sound like him. My first years of slide were exclusively in open E tuning, but I grew fond of open G and love the tension of open A. As for newer slide players, hats off to Sonny Landreth. As for other styles, I can’t get enough Richard Thompson, Tony MacManus, or Tommy Emmanuel.

How did your gear evolve over the years?
From 1965 through ’78, I went from a Vox AC30 SuperTwin Reverb to a Marshall Major plexi, and then ultimately to my wall of Hiwatts with Hydra. My main guitars were a ’59 Les Paul ’burst – serial number 9-1880 – a ’64 Gretsch Tennessean, and a ’50s Tele. I never used pedals back then, other than an occasional wah.

What vintage gear do you have now?
Not much, aside from an old Bedrock 1201 combo that once belonged to my dear friend, the late Harold Kelling of the Hampton Grease Band, and a 1969 Les Paul Custom that I used with Hydra. I have a Les Paul ’58 reissue, but in general I gravitate to a ’50s parts-o-caster made by my friend Greg Henderson. It has a beefy, maple V-neck with a swamp ash body, Mullinax bridge pickup, and Rio Grande neck pickup.

Where’s the ’59 ’burst?
I sold it when my first wife required hospitalization in 1974. It went from George Gruhn’s shop to someone in Corpus Christi, then a Dallas collector, and now Billy Squier owns it. And yes, I want it back (laughs)! I could never afford what it it’s worth now, but trust me, 9-1880 is a ’Burst with big magic!