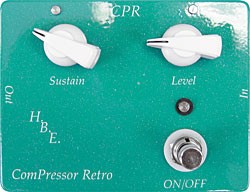 Seldom will you find a company more appropriately dubbed than HomeBrew Electronics.

Joel Weaver, his wife, Andea, and their sole employee, Terri Landreth, build some of the most widely used boutique stompboxes in the industry, employed by heavy hitters like Steve Lukather, Carlos Santana, Rick Nielsen, and Richie Sambora.

And much like its name, HomeBrew’s roots are modest. After working for years in electronics repair and as an amp tech at a music store, as well as playing guitar for over two decades, Weaver decided he wanted to make pedals that most working musicians (like him) could afford, using the best possible materials. At first it was a part-time venture, but while showing his pedals at the 2002 Winter NAMM show, he took more orders than he anticipated (or could handle). Weaver suddenly found himself in the business full-time.

Today, the HomeBrew line consists of eight pedals that perform a host of functions, including overdrive, distortion, treble boost, tremolo, fuzz, sustain, and compression. All are built using high-quality parts and components like Cliff true-bypass footswitches, Alfa pots, mil-spec Teflon-coated wire, and metal-film resistors. And one of the cool things about HomeBrew stuff is that you can customize the appearance of your pedal. Custom finishes include tweed and checkerboard, and other options include remote boost and diode footswitch jacks. Weaver recently invited us to test drive his Power Screamer overdrive and Compressor Retro pedals.

The Power Screamer has all of the customary overdrive controls – gain, level, tone – and a true bypass footswitch with LED. But it also has a three-position diode selector and boost switch with LED. Connections are via chassis-mounted in/out jacks and a negative-center power jack.

Inside, the Power Screamer uses a JRC4558 IC chip (made famous by a certain bright green stompbox that also had the word “screamer” in its name) mounted on a printed circuit board, with chassis-mounted pots, switches, and jack, as well as a heavy duty 9-volt battery clip and connector riveted to its cover. The battery clip snaps securely into a connector at the end. Our tester also had one of the custom finishes offered by H.B.E. – a lacquered tweed covering, meticulously executed with clean corner seams and consistent pattern.

The Compressor Retro has controls for sustain and level, as well as a true-bypass footswitch with LED. It uses the same components, battery clip, and general build as the Power Screamer, and our tester offered us a look at the standard polyester powdercoat finish. 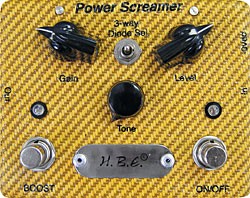 To test the pedals, we used a Crate V5212 and Fender Vibro-King 3×10″ tube combo, a G&L ASAT Classic Blues Boy with a Seymour Duncan Seth Lover humbucker in the neck position, a Fender Relic Stratocaster, and a Zemaitis Metal Top with custom DiMarzio pickups.

The Power Screamer’s tone with the ASAT and the Relic through the Crate was definitely in the crunchy overdrive vain one gets from the aforementioned green pedal. But with the H.B.E., you don’t get the bump in the mids you normally get with the vintage pedal. Instead, you hear a smooth, creamy overdrive with musical overtones and ample amounts of gain, without the fuzzy high-end.

With the diode switch in the first position and the tone control at 12 o’clock, we had a vintage 808-style sound with midrange bark. But with the switch in the middle, the tone was much more flat and true. This was our favorite setting. Even with the gain on the pedal dimed, it stayed tight and punchy, with great note clarity.

Manipulating the three-way diode mode switch and tone control, we dialed in fairly transparent tones with the single-coils in the Relic Strat and the humbuckers in the ASAT and Zemaitis. The boost switch added 6 db of gain to the signal, increasing both the volume and gain without really changing the tone. The difference was a slight loss of low-end, but for a solo boost, that isn’t a big concern.

The Power Screamer also worked well as a moderate boost/overdrive. With the gain turned down and the volume up, running through the Vibro-King it gave us a semi-crunchy clean sound.

Coupling it with the Compressor Retro gave several good, usable sounds; the compressor by itself had a punchy clean sound with nice snap and attack that we could use as a solo boost. Putting it in front of the overdrive added near-infinite sustain.

Like most compressors, if one dials in a lot of sustain, it squeezes out a little too much tone and dynamics. But if used sparingly, it stays fairly transparent-sounding and adds smooth sustain.

Both H.B.E. pedals sound great and have a cool handmade vibe, for the price one would expect to pay for a standard, mass-produced pedal.