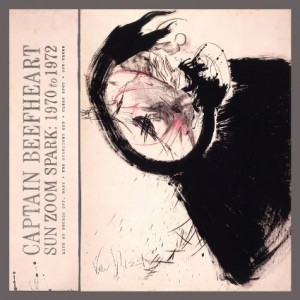 “Lick My Decals Off, Baby,” “Woe-Is-Uh-Me-Bop,” “My Head Is My Only House Unless It Rains.” That’s right – we’re talking about Don Van Vliet, a.k.a. Captain Beefheart, and his Magic Band.

Beefheart and co. emerged from the Southern California desert in the mid ’60s. Their first full-fledged album, 1967’s Safe As Milk, was a combination of blues and psychedelia, Beefheart’s gruff vocals backed by guitarist Ry Cooder. There were hints at avant things to come (the jagged “Electricity,” the marimba waltz break in the middle of “Dropout Boogie”) as well as the doo-wop Captain and Lancaster High schoolmate Frank Zappa adored (“I’m Glad”).

Following the Zappa-produced classic Trout Mask Replica in ’69, Beefheart and his Magic Band released 1971’s Lick My Decals Off, Baby and both The Spotlight Kid and Clear Spot in ’72. These three albums, remastered by Dan Hersch, make up this box set, with the additional CD of, as its title suggests, Out-takes.

There is much for Beefheart fans to debate – how much (or how little) the remastering improved the audio, what unreleased tracks were included – but it should first be noted that there are plenty of highlights here, including Bill “Zoot Horn Rollo” Harkleroad’s angular lead guitar on “Bellerin’ Plain” and “One Red Rose That I Need” (and rhythm behind Beefheart’s atonal soprano sax on “Japan In A Dishpan”) from Decals, Mark “Rockette Morton” Boston’s bass playing throughout, Elliot “Winged Eel Fingerling” Ingber’s guitar on Spotlight’s “I’m Gonna Booglarize You, Baby” and “Alice In Blunderland,” and Hackleroad’s ES-330 slide on Clear Spot’s “Big Eyed Beans From Venus.”

The uninitiated should get Trout Mask, then graduate to these. Longtime Beefheart fans, however, will argue the merits of the Out-takes disc and Rip Rense’s liner notes. Guitarist Henry Kaiser had the official job of going through the unreleased material at Warner Bros. in 1981, to find songs for Ice Cream For Crow, featuring a completely new lineup. He states, “It’s really odd that they selected what is certainly not the best of the unreleased material – instead of great completed tracks from those three albums, like ‘Funeral Hill,’ ‘Drink Paint Run Run,’ ‘Well Well Well’ (with Rockette Morton vocal), ‘Big Magic,’ ‘You Should Know By the Kindness of a Dog,’ to name a few, plus some interesting duets with Don and Elliot Ingber from the Spotlight sessions.”

Indeed, Beefheart was quoted as saying they cut 35 songs for the 10-song Spotlight, and one YouTube posting contains three-plus hours of excellent previously unreleased masters.

Rense’s self-consciously pretentious liner notes include quotes from Simpsons creator Matt Groenig and Los Lobos’ David Hidalgo, but contain barely a sentence from the actual band members. For a taste of that perspective, there’s drummer John “Drumbo” French’s book, Beefheart: Through The Eyes Of Magic.