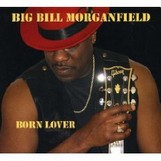 Talent isn’t always inherited. And
when it is, the ability to develop it
doesn’t always come along with it. Big
Bill Morganfield inherited a healthy slice
of talent from his father, Muddy Waters.
Luckily for blues lovers, he also brings
his own distinctive self-developed skills
to the table. Yes, he’s Muddy’s son, but he
is his own man – spelled “m-a-n.”

Medical problems prevented Morganfield
from playing a more prominent role
on guitar here, but he takes charge on
a couple of cuts, including the original
“High Gas Prices,” while Brian Brisesi
and Waters band veteran Bob Margolin
handle the bulk of the guitar. Both are
more than up to it, and on Wolf ‘s “My
Last Affair,” Margolin even throws in
a taste of Hubert Sumlin.

Certainly, there are echoes of Muddy
in the powerful voice so similar in tone
and quality. But you also hear a voice
that is uniquely Morganfield’s, one that
goes places Muddy didn’t. Morganfield
shows his versatility by dipping into
old-fashioned Solomon Burke-style
soul on “My Love Is Real,” though the
bulk of “Born Lover” is firmly and
satisfyingly in his wheelhouse of solid,
quality blues.