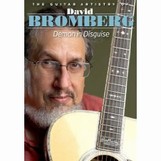 Not to be confused with a live DVD of the same name, which was released in 2008 and quickly vanished, this is part of Stefan Grossman’s “Guitar Artistry Of” series.

Playing only his signature model Martin acoustic, Bromberg is alone for most of this, with Grossman serving as off-screen interviewer, and guitarist/mandolinist Bobby T – dueting with David on five of the set’s 20 songs.

Faithful to Bromberg’s eclecticism, the repertoire runs the gamut from blues to gospel to bluegrass to ragtime and more. It’s almost disconcerting to see a crowd pleaser of Bromberg’s caliber playing only to the camera, but the format lends itself to his between-song anecdotes, which are both insightful and entertaining, and features terrific camera work, with clear views of both hands – fingerpicking, flatpicking, and playing slide.

He talks about recording with Bob Dylan before performing “It Takes A Lot to Laugh, A Train To Cry,” marvels at Blind Blake’s prowess before “Chump Man Blues,” and recalls meeting Lonnie Johnson before playing a sparse, almost spooky rendition of “Levee Camp Moan.”

The 63-year-old, who in 2007 released his first album in 17 years, can be forgiven if his chops aren’t quite as adept as they once were. If you want to hear ragtime played flawlessly, there are folks like Guy Van Duser (or, for that matter, Grossman). But a little rough around the edges though it may be, Bromberg’s playing is full of personality – not unlike his mentor, Rev. Gary Davis, whom he references more than once. And the highlight of the one hour, 40 minute set is perhaps the simplest from a technical standpoint, Paul Siebel’s poignant “Spanish Johnny.”

Bromberg’s comeback CD earned him a much-deserved Grammy nomination. This DVD is an additional celebration of a master musician’s return to active duty.