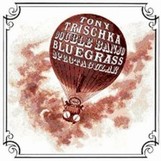 Tony Trischka’s 35-year career has seen him play with Tony Rice, Mike Marshall, Darol Anger, Jerry Douglas, and David Grisman. He’s also Bela Fleck’s banjo teacher. And though he started as a bluegrass picker in the style of Earl Scruggs, Trischka grew past bluegrass into newgrass, jazz, and acoustic fusion. He’s a founding member of the band Psychograss, whose moniker says it all.

Here, Trischka has returned to his roots, more or less, by collaborating with nine banjo players, including Earl Scruggs, Bela Fleck, Alison Brown, Tom Adams, Bill Emerson, Kenny Ingram, Noam Pikelny, Scott Vestal, and Steve Martin (yeah, the one with white hair and the arrow through his head). The band for this series of sessions included Sam Bush, Chris Thile, and Mike Compton on mandolin, and Kenny Smith, Tim Stafford, Dudley Connell, David Grier, and Tony Rice on guitar.

Although this isn’t the first time that two banjos have shared a stage, it is the first time in awhile that an entire CD was devoted to the exercise.

Trischka goes from traditional tunes such as “Farewell Blues” (with Earl Scruggs) to the outer limits of acoustic music with Bela Fleck on the original, “Ivory Toad of Catalan” and Fleck’s “Armando’s Children.” Although the CD’s title indicates a strong bias toward banjos, every song is far more about ensemble collaboration than continuous banjo noodling. Ample fiddle, mandolin, and guitar solos keep listeners from going banjo crazy. And every cut has natural, articulate sonics that highlight the personality of each player and instrument. Banjos often get a bad rap for their tone, but on Double Banjo Bluegrass Spectacular, you can hear how melodic, and even mellow, a banjo can be.

This disc is recommended for acoustic music connoisseurs, even banjophobes! It’ll cure what ails you.


This article originally appeared in VG‘s Apr ’07 issue. All copyrights are by the author and Vintage Guitar magazine. Unauthorized replication or use is strictly prohibited.