Home Music The Monkees – More of the Monkees 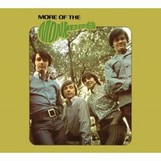 Dovetailing off our yearly rant when the nominations for the Rock & Roll Hall Of Fame are announced, a fellow writer and I segued into our ritual of listing the glaring omissions who should be in the Hall and the questionable inductees who shouldn’t. When the Monkees entered the debate, my colleague argued, “They made great records – in the beginning with crack studio musicians, and later playing their own instruments and writing some of the songs themselves.” I agreed that some of those records (whoever made them) were mighty fine, but stopped just short of “over my dead body” at the notion of the Prefab Four being ensconced in the same institution as Clyde McPhatter, Duane Eddy, and the Everly Brothers.

The basic story behind the Monkees is by now well-known. Hollywood producers came up with the idea for a zany TV show about a rock and roll band and auditioned “folk & roll musicians” for the group. They didn’t spring organically out of some garage, and I don’t have a problem with that. I don’t even have much of a problem with the fact that the resultant band of musicians turned actors and actors turned musicians didn’t play the instruments on their early records; that was far from new in the music biz. I just think, for the most part, the producers picked the wrong guys.

The members were chosen for their small-screen talents, not their musicianship. Cuteness and marketability were more important than their singing and songwriting.

With the exception of some tracks produced by guitarist Michael Nesmith, Tommy Boyce and Bobby Hart or Jeff Barry (sometimes in tandem with Jack Keller) produced the early sides, and in the case of Boyce and Hart also provided background vocals. Again, with an occasional contribution from Nesmith, the producers wrote much of the material or enlisted established songwriters like Carole King and Gerry Goffin, Neil Diamond, David Gates, Barry Mann and Cynthia Weil, John Stewart, and Neil Sedaka. In the case of the band’s first two albums (now reissued in deluxe two-CD editions, each with mono and stereo mixes and outtakes), such studio greats as Gerry McGee, James Burton, Glen Campbell, Louie Shelton, Al Casey, and Mike Deasy were onboard – and that’s just the guitarists. (It’s Shelton you first hear on “Last Train To Clarksville,” followed by McGee’s fingerpicking.)

So what’s not to like? Drummer Mickey Dolenz and tambourine man Davy Jones had an abundance of comedic ability but weren’t strong enough lead singers. If you can get past that, this is a fun stroll down memory lane with a few new detours. But it will never belong in the same Hall as the real Fab Four.


This article originally appeared in VG‘s Mar ’07 issue. All copyrights are by the author and Vintage Guitar magazine. Unauthorized replication or use is strictly prohibited.

Geoff Muldaur – The Guitar Artistry Of