The murky history of guitar brands and builders from the Bakersfield area of California is part of American guitar lore. One of the most striking designs to emerge from that area in the 1960s was the Hallmark Swept Wing.

Hallmark was founded in 1965 by former Mosrite employee Joe Hall. It began selling the Swept Wing model solidbody guitars and basses in ’66, but the model didn’t “fly” in terms of acceptance among musicians and instrument retailers. One theory holds that at that time, psychedelic music was emerging from San Francisco, and West Coast musicians were picking up more semi-hollow electric guitars because they were better at generating the feedback and sustain that were part of that style. So, in ’67 Hallmark began building semi-hollow Swept Wing instruments by routing sections of their alder bodies to create a skeleton-like frame, then gluing a lift to support the arch of their plywood top and back. The top veneer on that plywood was birch or a similar wood that had a noticeable grain pattern worthy of a quality finish. The semi-hollow body was 121/2″ wide and 2″ deep.

The bolt-on neck of the bass was two-piece maple, and had a rosewood fingerwood with 21 frets plus a zero-fret, which was common on guitars built in the Bakersfield area. The neck’s slim profile and 30″ scale made it fast and easy to play.

The two pickups are covered in tortoiseshell plastic; the neck pickup is angled, a la Mosrite. Each has four exposed, non-adjustable Alnico rods, and though later Hallmark Swept Wing six-strings had slightly different pickups with adjustable polepieces on their pickups, bass pickups didn’t change.

Controls were a three-way pickup toggle switch on the treble cutaway, master Volume and Tone knobs, and a top-mounted jack.

Beyond physical proximity of manufacturing facilities and the angled neck pickup, the Swept Wing had other connections to Mosrite. Its bridge cover, nickel-plated brass bridge saddles, and strap buttons (among other parts) were made at Mosrite. However, Hallmark made its own bridge plate from stainless steel, while Mosrite used brass, and Hall’s company made its own tailpieces.

The three-tone sunburst finish was applied in the same process used at Mosrite. In fact, Bill Gruggett, another Bakersfield veteran who later started building guitars with his own name on them, did finish work at Mosrite before going to work at Hallmark in ’66.

Asymmetrical oddities on the semi-hollow Swept wings included a three-layer, white/black/white pickguard with a silhouette that looked like the blade of a battleaxe, as well as a small and odd-looking f-hole.

Hallmark serial numbers are found on the neck plate and the back, and did have a code somewhat like the Electronic Institute of America’s code on potentiometers. This bass’ serial number (003127) indicates it was the third instrument made in the 12th week of 1967. An order form from that year shows the semi-hollow line was marketed as “electric acoustic.” On it, the single pickup Acoustic I bass listed for $289.95, while the two-pickup Acoustic II listed for $312.95. The Acoustic series was only available in sunburst or Cherry Burst finishes. 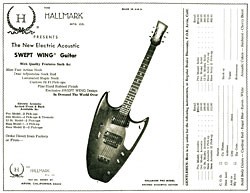 Most of the Hallmark basses built were one-pickup instruments. Two-pickup models are quite rare; Hall believes this bass was a one-off, perhaps a special order instrument.

The present-day Hallmark company is under the aegis of luthier Bob Shade and offers several Bakersfield-inspired models. A modern version of the Swept Wing was the first six-string offered by the company.

“The original Hallmark made few more hollow-style basses, but not many,” said Shade, who owns the instrument shown here. “[It has] a very mellow, clear, and resonant sound. It really sounds quite amazing considering its small body.”


This article originally appeared in VG‘s August 2009 issue. All copyrights are by the author and Vintage Guitar magazine. Unauthorized replication or use is strictly prohibited.