If you’re a fan or aficionado of vintage instruments, odds are that any early-’60s Fender Jazz Bass catches your eye. And “lefty” versions are especially intriguing, given their rarity.

The Jazz was Fender’s second electric bass, following the groundbreaking Precision, which was introduced in late 1951 and underwent three stylistic changes by the time the Jazz Bass came along in 1960. Seeking to take versatility and comfort beyond the P-Bass, the Jazz incorporated a thinner neck that was 17/16″ wide at the nut, compared to the Precision’s 13/4″. The original Jazz also had an unbound rosewood fretboard with dot markers, and a 34″ scale – considering the success of both models, it’s not surprising that the 34″ scale ultimately became the industry standard. The Fender logo on the Jazz’s headstock was a new style that replaced the “spaghetti” logo with what became known as the “transitional” logo, in erroneous reference to CBS’ purchase of Fender in ’65. In reality, the Jazz Bass had this logo from the get-go.

Among the Jazz’s most distinct design elements are its offset carves in the midsection of its alder body; the carves on the P-Bass were symmetrical, but the offset “waist” made the Jazz more comfortable for playing while seated.

One drawback may have been that the Jazz Bass was slightly larger and (usually) heavier than the Precision. It was 3/4″ longer (461/4″ vs. 453/4″) and 1″ wider (14″ vs. 13″) than its predecessor, but maintained the same 11/4″ body thickness. However, in the eyes (and hands) of many players, the ergonomic innovations on the Jazz more than made up for minor differences in size or weight.

The electronics of the Jazz went beyond the fact that it was a two-pickup instrument, while the P-Bass had one. Jazz pickups are single-coil units with two pole pieces for each string, and their location on the body help it create a variety of tones. The controls on the first-generation Jazz consisted of two Volume controls and two Tone controls (one for each pickup) on concentric knobs mounted on a chromed-metal plate, with the Volume being the upper/smaller knob, while the lower/larger knob controlled its tone/EQ. The knobs at the junction of the plate and the pickguard controlled the pickup closer to the neck, and the knobs closer to the jack controlled the bridge/treble pickup. This “stack-knob” configuration was short-lived, and evolved into a three-knob (two Volume controls, one master Tone control) in early 1962. Like the Precision, the Jazz’s bridge had intonatable saddles for each string. 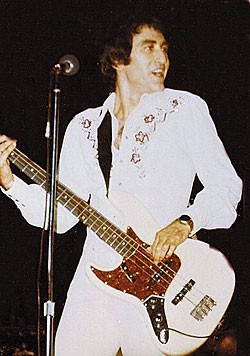 Long onstage with his Jazz Bass during the glory days of the Four Seasons. 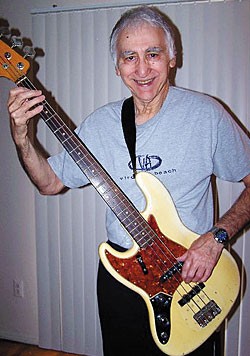 The Jazz Bass was introduced in a standard sunburst finish with a tortoiseshell pickguard. Blond or custom finishes became available within two years.

The instrument shown here belonged to southpaw bassist Joe Long, who started his first band, the Rockets, in 1957. “We were a five-man group that played R&B and the rock of the day,” he said. “A number of groups followed, until I joined the Four Seasons in 1965.”

Long ordered the bass prior to joining the Four Seasons. “Left-handed instruments were made to order at that time,” he said, adding that the blond finish was also a custom request. It served as his primary bass for recording and concert appearances, and has never been modified. He played it when the band recorded many of its hits, including “Can’t Take My Eyes Off Of You,” “Opus 17,” “I’ve Got You Under My Skin,” “Beggin’,” and “C’mon Marianne.” It was also played on the Four Seasons’ Genuine Imitation Life Gazette album from 1968 – the group’s “concept album” response to the Beatles’ Sgt. Pepper. And Long used it onstage at Carnegie Hall, Madison Square Garden (four times), the Coconut Grove in Los Angeles, and London’s Palladium.

Long left the Four Seasons in ’76, and subsequently worked as a session musician. Today, at age 75, he is “…retired, for the most part. I still do some assistant production work.” And while he parted with this bass in 2008, it was never retired or stored, remaining a working instrument until it was sold.


This article originally appeared in VG‘s May 2009 issue. All copyrights are by the author and Vintage Guitar magazine. Unauthorized replication or use is strictly prohibited.
Opus 17 Frankie Valli Bass Cover (using Joe Long’s Bass)