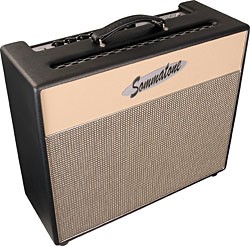 There’s an inherent dichotomy when it comes to guitar amplifiers; the more TLC that goes into their construction, the tougher they are. Think about your average mass-produced amp… Then consider the Sommatone Roaring 40.

The top-shelf treatment continues on the amp’s exterior, with a well-executed Tolex application with silver piping accents and a salt-and-pepper grille, along with a minimalist approach to hardware – just a high-quality leather handle and a metal vent; nothing bulky, and no corners.

Aesthetically, the Roaring 40 gives off a definite British vibe, with its top-mounted controls and shallow (9″) cabinet depth. Controls are straightforward; on top are a pair of 1/4″ inputs (High and Low), Volume controls for the Bright and Normal channels, as well as controls for Treble, Middle, Bass, Presence, Master Volume, and power/standby switches. The back panel has Mix and Dwell controls for the reverb circuit, as well as the switchable output selector (20 or 40 watts), speaker impedance selector, fuses, and power cord socket.

The control layout is straightforward and has a couple of unique features, including blendable Volume controls and the uniquely voiced Presence circuit. The blendable Volumes let you use as much of each channel as you want on a single input, and mixing the Bright and Normal controls creates tones ranging from bright and thin to thick and fat with varying degrees of gain. 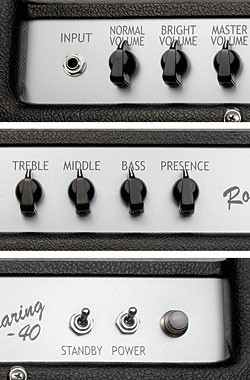 Playing a guitar with single-coil pickups, and with the master Volume turned up all the way (which takes it out of the circuit), noodling with the tone stack (10 o’clock to 2 o’clock) and the Volume controls (9 to 10) reveals harmonically rich British tones with thick mids, tight, round low-end, and clear high-end. With the Volume controls dimed, the Roaring 40 produces pleasant saturation and overdrive with nice crunch. Blending the Volume controls compensates well when you transition from single-coils to humbuckers; blending more Bright with humbuckers adds chime and a bit of cut, while blending in more Normal adds thickness to single-coil tones.

While the three-band tone stack offers subtle-but-distinct control, the real star here is the Presence knob, which not only adds snap and sizzle when set between 7 and 10, but smooths out the top-end and warms up the overall tone when set between 1 and 4.

The best way to tweak the 40’s output power is by using a combination of the 20-/40-/half-watt output switch and Master Volume. The tone cleans up by simply rolling off the guitar’s Volume control and easing up with the pick.

If the amp gets a bit loud, rolling off the Master Volume does not appreciably degrade the tone – until you get extreme with it. And its reverb lets you dial in everything from a ultra-wet to subtle ambience. The Sommatone Roaring 40 shines for its overdrive tone, circuit design, a versatile set of controls, and top-notch components.