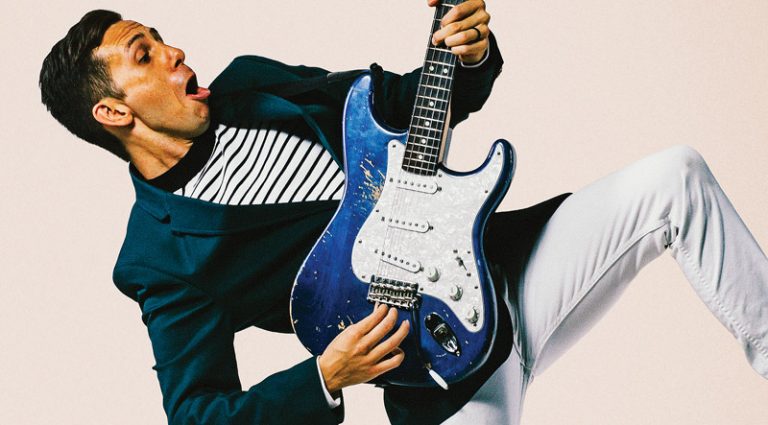 Cory Wong’s latest solo album, Striped, is a jubilant record and his eighth this year. Defying the temperature of the times with joy, fun, and positivity, Wong can also be heard with Vulfpeck and The Fearless Flyers. A production-savvy disciple of funk, he has Satch on speed-dial and wields the kind of enthusiasm inspired by productivity.

Your output in 2020 was freakish.
When the lockdown came about, I said, “What am I going to do with all this time?” I spent time with my family back home, but I have a studio at the house. I can go downstairs and work every day and chip away at projects. Because I’m a producer, writer, and guitar player, I can write and mix as I’m recording. The process goes a lot faster. I had a lot of creative momentum, and I was living in it.

What’s the idea behind Striped?
I wanted to give a 100-mile-an-hour fastball-right-down-the-middle Cory Wong album. “What do you think of when you think of Cory Wong?” Boom! This is the defining theme in my sound, my production, guitar playing, and writing. It’s rhythm-guitar-led, and I try to bring something unique to the guitar community.

Joe Satriani is on the record.
I sent him this funky track and told him, “You can bring this dark, mean, aggressive element to it.” When I heard his rough mix, I was cracking up, laughing, and yelling. His playing was perfect. I dropped the track directly into my Pro Tools session and that’s what you hear. He was out for blood – he cared, put the work in, and crushed it. Grand slam.

Which music led you to where you are today?
I grew up in the Minneapolis scene and cut my teeth in Prince’s rhythm section, New Power Generation. I was the only one who hadn’t played with Prince (laughs); my mentors were in Prince’s band. One of my guitar heroes is Sonny Thompson, who was Prince’s guitar and bass teacher. The Minneapolis approach to R&B and funk has a certain way it’s felt. It has a big impact on the way I play and sound.

What did you record with?
The album was done with the Cory Wong plug-in I developed with Neural DSP. It has a direct clean tone, clean solid-state tone, and a clean tube tone. The DI-console tone is direct and in-your-face like Prince, Nile Rodgers, or Jamiroquai. It’s like an SSL console. The middle one is called the Clean Machine. It’s based on solid-state amp tones. You get a quick punchiness. We also blended a Super Reverb with a Roland JC-120. The third amp we created is called the Amp Snob (laughs) – rightfully so because it’s based on a clean Dumble but with spices from a Bandmaster and a Twin, which both have a bubbly clean that I like.

How about pedals?
Since Vulfpeck started playing arenas, I’ve been using a Suhr wireless unit that goes into my Wampler Ego Compressor, which is my favorite compressor right now. I have an Eventide H9. I use the envelope filter and wah sound and have the expression pedal that controls sweep. That goes into a Vertex Steel String Clean Drive, which fattens the sound and gives a little extra grit. I also have a Vertex Ultraphonix, which is a Dumble-style overdrive. I’ve been toying with the Walrus Audio Warhorn, which is a more-classic overdrive and goes into a Strymon BigSky. I’m a gear nut, and I love trying different things.

How about amps?
I’ve been using the DV Mark Raw Dawg Eric Gales signature amp. It has a nice attack, a “snap” to it. With Vulfpeck, I backline with a Super Reverb or a Twin.

You’ve been playing the same guitar for a while.
I have two Fender Highway One Strats. It was the cheapest American Strat I could afford as a teenager when it was being made. I’m using Seymour Duncan’s Antiquity II Surfer pickups, but I’m talking with Seymour about developing a new thing. I have a bunch of other guitars, but there’s something about the Strat that keeps me coming back.

Do you worry about burning out?
I’m not even close because the things I’m doing are fun projects. The stuff I’m doing brings joy and energizes me. My plan is to keep having fun, writing music, exploring my voice on the instrument, and hopefully, people will keep digging it.