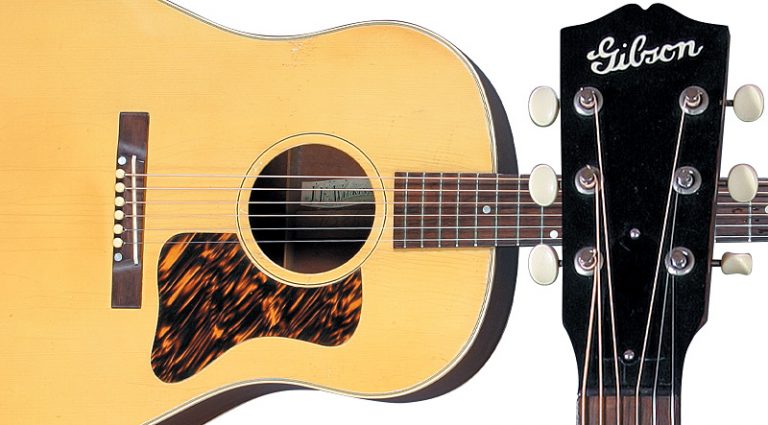 In the world of vintage guitars, people tend to use the words “blond” and “natural” interchangeably to describe a finish with no stain or pigment. However, in some cases, blond is a distinct color, different from natural. The standard for blond finish is, of course, “Tele blond,” the yellowish finish that Fender applied in a sort of whitewash style to Telecasters and Esquires, allowing the grain of the ash body to show through. That may be quintessential blond, but as this Gibson J-35 from 1942 shows, the Tele was not the original blond guitar.

While this finish is extremely rare on a Gibson, the conservative company actually had quite a colorful history when it came to finishes. From the beginning, Orville Gibson’s mandolins typically avoided the natural top finish of virtually every other mandolin and guitar made in the 1890s in favor of a rich brown stain that matched the walnut back and sides of his instruments.

After the Gibson company was organized in 1902, its higher-priced instruments sported a black top that made the ornamentation “pop.” The low end of the line featured tops that enhanced the wood grain with a stain its catalogs described as “golden orange,” better known today as “pumpkin top.” As the models began to change from walnut back and sides to birch or maple (they were always specified as maple), they gained a rich red mahogany-stain finish. In the basic light-and-dark world of natural-finished spruce tops and rosewood or mahogany bodies, these instruments with black, orange, and red hues were as distinctly Gibson as the company’s logo.

In 1914, on its higher models, Gibson extended the red mahogany stain completely around the instrument, giving it a slightly shaded effect on the top. Four years later, the shading was accentuated into a more modern “sunburst” finish. Also in 1918, the Style 3 instruments introduced a striking, opaque white top finish (standard on the A-3 mandolin, optional on the L-3 guitar) that simply could not go unnoticed in any aggregation of instruments.

Gibson’s next finish color is viewed today as the epitome of a traditional guitar finish, but in 1922 it was as fresh and new as Gibson’s white and red tops had been in the 1910s. It had a deep amber shade in the middle of the top that seemed almost to be peeking through a deep and wide dark-brown border. The finish debuted on Gibson’s new family of Style 5 Master Models with a name – Cremona brown sunburst – that suggested a connection with Amati, Stradivarius, Guarnerius and all the fine violin makers from the Italian town of Cremona.

Through the 1920s, Gibson and other makers responded to the opulence of the Jazz age by creating ever-more-lavish finishes and ornamentation schemes for banjos, but the look of Gibson guitars remained virtually unchanged, with Cremona sunburst reserved for the L-5 and other Style 5 mandolin family instruments, while the red mahogany continued on older high-end models such as the L-4.

In 1931, Epiphone launched its line of Masterbilt archtops. Not coincidentally, all eight Masterbilt models featured a Gibson-like sunburst finish. Whether it was the prestige of Gibson’s L-5 or the pure aesthetic appeal of the light-to-dark brown shading, the sunburst finish quickly became the industry standard for archtop guitars. With a few exceptions at the low end, which had black- or natural-finished mahogany tops, Gibsons were all sunburst through the mid 1930s.

In an era of fierce competition, a small difference can turn into a big advantage, and Gibson came up with a new finish color that made its archtops stand out from those of Epiphone, Gretsch, or any other leading maker. This time, it was no color at all. Beginning in 1937 (though not officially offered until ’39), Gibson’s high-end archtops were offered with a clear finish that showed off the natural color and grain of the wood. Epiphone wasted no time, introducing natural finishes in 1939. Two years later, Epi began using the term “blonde” in some cases and featured three natural-finish models on a catalog page “for those who prefer blondes.”

Although archtop guitars were the foundation of the Gibson company and Gibson’s specialty in the 1930s, Gibson had started making flat-tops in the 1920s. In 1934 the company launched its first “jumbo” model to compete with Martin’s new dreadnoughts (which had been introduced in 1931). In 1936 Gibson replaced the original Jumbo with two dreadnought models: the rosewood-body Advanced Jumbo and the mahogany J-35, which were designed to go toe-to-toe with Martin’s D-28 and D-18, respectively.

As in the archtop market, the influence of Gibson’s sunburst could be seen in the flat-top market. Martin, which had made natural-top guitars exclusively for almost a century, began offering “shaded top” finishes – their version of sunburst – by 1931. Like virtually every other model in the Gibson line, the AJ and J-35 were offered with sunburst finish only.

Throughout Gibson history, cheaper models have typically outsold “marquee” models, and in the flat-top line of the late 1930s, the small-bodied L-0 and L-00 far outsold the Advanced Jumbo and SJ-200. The J-35, though a dreadnought, had a price of $37.50 that was much closer to the small-body models ($25 for the L-0, $30 for the L-00) than the $80 tag on the Advanced Jumbo. And the J-35 sold accordingly, averaging over 400 instruments a year from 1937 to ’40. In 1940, the natural finish option that had become increasingly popular on archtops was extended to the J-35 (although none may have shipped until 1941). The power of the J-35’s sound was apparently recognized by the buying public in ’41, when J-35 shipments surged to 846 units (including 49 with natural tops), surpassing all other Gibson models – flat-tops, archtops, electrics, banjos, mandolins, lap steels – except, surprisingly, Gibson’s V-25 violin.

Despite growing sales of the J-35 (and the smaller-bodied flat-tops as well), and despite America’s abrupt entry into World War II after the bombing of Pearl Harbor in December 1941, Gibson began overhauling the flat-top line in ’42. By August, Gibson had introduced a new dreadnought, the J-45, that would replace the J-35 (plus the LG-2 to replace the L-0 and L-00).

Sometime in 1942, someone at Gibson decided to paint a few J-35s with a near-opaque blond top finish. The serial number of this guitar includes the letter H, which would indicate 1942 production, but Gibson shipping records stopped listing serial numbers at that time, so its place in the J-35/J-45 timeline is unknown. Why this finish was chosen is also unknown. A few Epiphone Triumph archtops from the same period have shown up with a similar finish, but again, it’s impossible to determine which came first.

Also unknown is why the blond finish was dropped. Perhaps Gibson and Epiphone determined that it was more trouble and in less demand than natural. What is known is that the concept appealed to Leo Fender, who in 1950 abandoned the black finish he used on his earliest Esquire model and adopted the “see-through blond” that is still a standard today on Telecasters and Esquires.

Thanks to Lynn Wheelwright for his help researching this piece.


This article originally appeared in VG‘s December ’08 issue. All copyrights are by the author and Vintage Guitar magazine. Unauthorized replication or use is strictly prohibited.