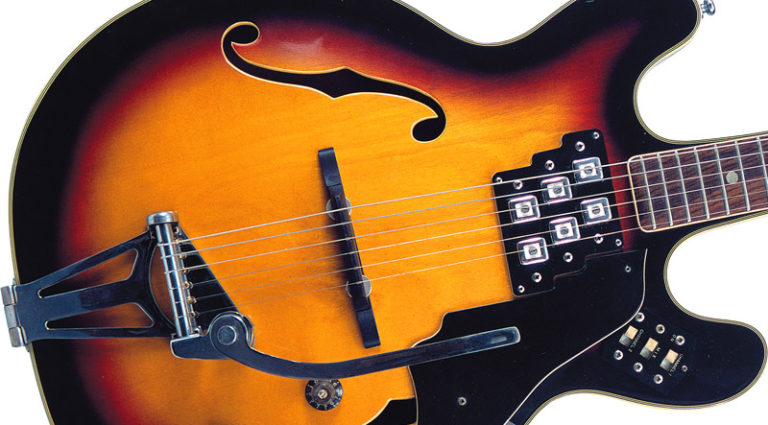 The notion of a stereo guitar became almost implicit when guitars started having two pickups. But it didn’t become a reality on an actual production guitar until the great tapping player Jimmie Webster persuaded Gretsch to come up with the legendary White Falcon in 1955. The stereo option didn’t arrive right away, but by ’58, a stereo Falcon was available. The following year, Gibson introduced the stereo ES-345, and stereo guitars were on their way. Two pickups through two different amps! Or at least two different channels.

In ’66, the Holman-Woodell company of Neodesha, Kansas, produced stereo guitars for the Wurlitzer company of Elkhardt, Indiana. In 1967-’68 – much closer to the psychedelic era – the San Francisco-based Messenger introduced its aluminum-necked stereo guitars. This budget-level Japanese-made St. Moritz guitar appeared at some point in this time frame, a poor man’s alternative to the White Falcon or ES-345.

It’s difficult to determine just who sold the St. Moritz brand name. In the ’60s, the Japanese guitar industry was pretty chaotic by American standards. There were many factories, but parts may have been made by smaller/family entities. Then guitars were sold to trading companies who handled the business end of things. They sold guitars to various importers in the market countries, usually with the importer’s brand name, but sometimes with the trading company’s own brand. The importer may or may not have been the distributor. If not, the importer sold the guitars to a distributor. By contrast, American Gibson or Martin guitars were made by Gibson or Martin and sold by their reps to retailers or were occasionally handled by a distributor. Much cleaner. In the ’60s, the St. Moritz brand could have been Japanese, Asian, American, Australian, or European – it’s something of a mystery.

We also can’t be absolutely positive who made this guitar, but the evidence is fairly persuasive; the finger points to Fuji Gen Gakki, one of the most advanced guitar manufacturers in the world, and most famous for producing Ibanez and Greco guitars.

One of the most telling indicators of Japanese guitar makers is pickups. Almost every one had unique pickup designs. Early Ibanez guitars, made by Fuji, had narrow pickups with white-grey ceramic bobbins. The identical metal surrounds and ceramic bobbins on this St. Moritz point directly toward Fuji.

Furthermore, there’s the quality of construction that suggests Fuji. It and Matsumoku were the two best guitar factories in Japan at the time. Nothing here suggests the latter. Ever played one of those 3/4 Teisco thinlines? No question about loving it… not! This guitar is seriously constructed; solid maple neck with a five-bolt attachment. Count ’em – five! The truss rod works fine and the binding looks like multi-ply, but like so many Japanese guitars of the era it was cheaper to have single-ply celluloid painted to suggest alternating plies! Imagine the amount of work compared to simply using multi-ply! The maple body is probably laminated, but that’s not certain because the f-holes are bound. Besides, on an electric thinline, who cares?

When was this guitar made? Again, there’s no reference material to tell us. But the high quality of the finish and solid construction suggest later in the ’60s. Japanese guitar finishes into 1968 were okay, but not great. The finish on this guitar is pretty darned good. This would tend to place it somewhere between 1968 and 1970 or thereabouts. This is consistent with other Fuji products. However, the pickups argue for slightly earlier; by the late ’60s most Japanese pickups had moved beyond these ceramic bobbins. But then again, this may have been an almost experimental guitar using stuff left in the factory.

Finally, there’s the innovation of the stereo idea. Teisco was pretty innovative in certain aspects, but this is clearly not a Teisco product. Matsumoku was pretty innovative, especially with pickup switching, but this is almost certainly not theirs. The whole idea of this guitar’s electronics is compatible with early Fuji experimentation. Thus, while this conclusion could be wrong, this guitar was probably made by Fuji Gen Gakki, makers of most Ibanez guitars.

By now you’ve probably deduced that this guitar is pretty high-quality. It is. But the real interest is in the electronic ideas. Actually, this guitar would be curious for the look of the pickup alone! But here’s how it plays out from a sonic perspective. Each of the six poles has its own coil, but they’re wired in two stereo channels, with strings 6-5-4 in one and 3-2-1 in the other. The result is actually a series of three coils for each pole piece instead of just one around all three. This makes for a pretty powerful output, especially compared to the older single-coils on early Ibanez guitars. This guitar sounds surprisingly good.

The separate channels are controlled by three on-off slider switches; two control the individual channels. The center switch is for Mix, which gives you mono output through a mono plug, but only if both channels are in the “on” position. The downside is the components themselves. Like most ’60s Japanese guitars, this has super fine gauge wire, chintzy switches, crummy pots, way too little solder on the connections, and almost useless capacitors. This guitar works as intended, but you generally have to fiddle with the switches to get them to function properly, and the jack must be in the correct position. Using the tone pot lets you dial in treble and… more treble!

Nevertheless, this is a brilliant guitar concept, boldly executed. If it had the benefit of better components, it would be a remarkable achievement!

Whether this is a rare bird or not is unknown, but the Ibanez brand itself did not reach very high production runs for most of its models until the later ’70s. Only one other example of this style of guitar has ever been seen by yours truly, so it’s probably not plentiful. Very cool!

This article originally appeared in VG‘s November 2008 issue. All copyrights are by the author and Vintage Guitar magazine. Unauthorized replication or use is strictly prohibited.