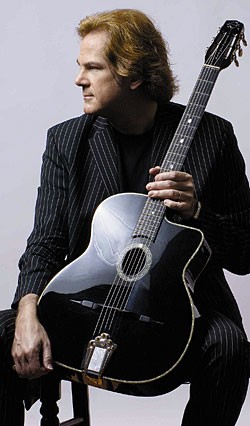 John Jorgenson’s latest offering is French Gypsy jazz played by a California boy as recorded in Nashville and honed while touring the world over.

Jorgenson’s fascination with the music of Django Reinhardt goes way back. He began playing Gypsy jazz three decades ago while gigging at Disneyland. By 2004, he was playing Django himself in the Hollywood film Heads in the Clouds as stars Charlize Theron and Penélope Cruz shimmied to his guitar.

Now, Ultraspontane (J2 Records) offers more of Jorgenson’s stylish and adventurous jazz. And yet given his résumé backing Elton John and his role as one of the fabled Hellecasters, there’s a rock’n’roll intensity to the groove. This new album just may be Jorgenson’s masterpiece – at least so far.

“Probably the biggest difference in creating Ultraspontane from Franco American Swing [his last album] is that I have been touring steadily since… so most of the material was developed onstage,” Jorgenson explains. “This helped to foster more dynamics in the tracks and more overall energy, plus my chops were stronger, and I always like to push myself in the studio to up the ante in terms of expression, intensity, and technique.”

Naturally, Ultraspontane includes several classic Django melodies, yet the other 10 tracks here are originals. Jorgenson has been able to break out of the stranglehold Django has over many musicians in this genre.

“One thing I noticed while touring was that the audiences seemed to respond particularly well to my own compositions, especially the ones that contained unusual grooves,” Jorgenson says. “This inspired me to write more, and helped me to feel free to add some of my other influences into the music. I get really inspired by gypsy music of all kinds, from the Bulgarian brass of Fanfare Ciocarlia and the cimbalom-driven rhythms of Taraf de Haïdouks, to the many incredible flamenco guitarists and singers like the Greek gypsy Kostas Pavlidas. I feel like my style is still gypsy jazz, but I am pushing the boundaries in all sorts of directions – classical, funk, world, gypsy, etc.!” 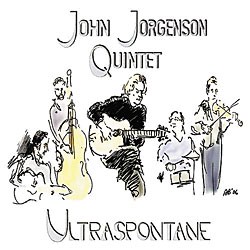 Jorgenson’s own musical journey can be seen in the changes he’s wrought to his composition “La Journée Des Tziganes.” He first cut the melody for the Hellecasters’ 1997 album Escape From Hollywood. “My inspiration came from wanting to have some of the feel and tonality that I enjoyed in the Gipsy Kings music, but played on the electric guitar.”

On Ultraspontane, he’s recreated the song with a greater understanding of Gypsy music.

“The recasting of the main melody for acoustic guitar was not as hard as I thought it might be. On electric guitar, I used a hybrid picking technique of flatpick in conjunction with my ring and middle finger. On gypsy guitar, I needed to do everything with a flatpick. The song worked well live, and gave the Quintet a chance to stretch out and jam a bit. I guess the song has come full circle, inspired by an acoustic group, realized by an electric group, and renewed by an acoustic group!”

“La Journée Des Tziganes” has since become his band’s anthem, a show-stopping jam often rewarded with standing ovations. This can be seen firsthand in Jorgenson’s other new release, John Jorgenson Quintet In Concert, a two-DVD set filmed live in Vicenza, Italy. The setlist here is half Django, half Jorgenson; the musicianship by the Quintet is pure inspiration.

Jorgenson recorded Ultraspontane over a year in Nashville, taking things slow and getting the music right. Rhythm tracks were cut at bassist Charlie Chadwick’s OGM Studio by Jorgenson’s Quintet, including Stephan Dudash on five-string viola and rhythm guitarist Gonzalo Bergara. Solos and overdubs were then added at a studio Jorgenson erected in a rented space on Music Row. Backing strings by the Nashville Chamber Orchestra were recorded at a third studio. The recording, editing, and mixing was done in Sonar 4.

Still, even with such talented and eclectic support, Jorgenson remains the mainstay. On the album, he played the solo guitars, some rhythm guitar parts, clarinet, some percussion, and even autoharp.

For guitars, Jorgenson has quite an arsenal to choose from, and each one provided an inspiration or unique voice for a song. The opening track, “El Camino del Che,” chronicles Che Guevara’s journey through South America as recounted in the book and film, Motorcycle Diaries. Here, Jorgenson was moved by the tone of a 1939 Selmer guitar in creating the tune. 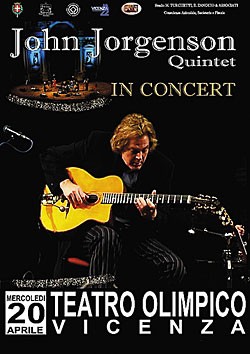 On other songs, he plays a 1942 Selmer oval-hole, a mid-’30s Selmer D-hole, and a ’95 custom Maurice Dupont guitar. He also used his prototype Gitane John Jorgenson guitar and a signature all-black “Tuxedo” model Gitane.

One of the standout tunes on Ultraspontane is “Don’t Worry ‘Bout Me,” which features Beryl Davis as guest vocalist. Davis first recorded this melody in 1938 with Django Reinhardt and the Quintette du Hot Club de France. Now she’s in her 80s, but has lost none of the spark she displayed when fronting Django’s band.

“I found Beryl living in Burbank and invited her to one of our shows a few years ago,” Jorgenson related. “We got along really well and she agreed to perform with us at a couple festivals. The response was so great I knew I had to get her into the studio.”

One of the greatest rewards came this June at the vaunted Django Reinhardt Festival at Samois-sur-Seine, just south of Paris. Jorgenson and Quintet were booked into the headline spot, a rare honor for an American Gypsy jazz band at a French concert. The audience was made up of numerous Romany, many of the world’s Django cognoscenti, and other artists, such as Stochelo Rosenberg, Romane, and Angelo Debarre. “That meant a lot to me,” Jorgenson says. “And I was incredibly nervous!”

“When we finished our last song, the crowd was on its feet and cheering for a long time – it felt incredible! It seemed like we would get an encore no problem, but as we left the stage, the emcee told me they were out of time. When he announced that to the cheering crowd, they created such a roar he told us to get back onstage! We happily accommodated, and I must say, for a California-raised boy who has loved Django’s music for nearly 30 years, it was a defining moment in my life. I still get a chill when I think about it.”


This article originally appeared in VG‘s December 2007 issue. All copyrights are by the author and Vintage Guitar magazine. Unauthorized replication or use is strictly prohibited.
John Jorgenson – Ghost Dance