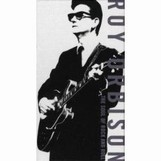 When Roy Orbison walked onstage, the black Gibson ES-335 around his neck wasn’t just for show. Orbison was a pretty good picker, and he holds down a good portion of the guitar on the sides from the Teen Kings and the Wink Westerners included in this comprehensive set. For his signature hits of the early 1960s he deferred to Grady Martin, H arold B radley, Ray Edenton, and Joe Tanner, while B oudleaux B ryant
(“Crying”) and Scotty Moore (“Crying,” “Candy Man”) would occasionally lend a hand. But in live shows it was Roy who usually laid out the iconic lick that kicked off “Oh, Pretty Woman” and crack off more than a few good solos. But Texas towns (like Wink, where Orbison grew up) breed guitar players like deserts breed dust. Though his place in rock and roll history was carved with a peerless voice, Orbison might have made a place for himself in music if he had never sung a note. A 1987 “Saturday Night Live” appearance that came while the buzz was still high for Blue Velvet, the 1986 David Lynch film that helped breathe new life into the careers of Orbison and Dennis Hopper, showed a man in his musical prime. Orbison was only 51 at the time and would leave an unfillable space just a year later, passing away in December of ’88.

He left one hell of a legacy, though, and most of the significant moments of a career that spanned 30 years yet still seems truncated are collected here, faithfully remastered, sounding great, and reminding us that Orbison stood outside time. Songs like “Runnin’ Scared” maintain their cinematic grandeur decades on. Orbison’s voice remained undiminished throughout his life – evidenced by the T-Bone B urnett produced version of “In Dreams” recorded for Blue Velvet; “Coming Home” from his mid-’80s Class Of ’55 collaboration with Carl Perkins, Johnny Cash, and Jerry Lee Lewis; and the live selections from the “Black And White Night” television special. It was the same with the various Virgin recordings from the ’80s. Those sessions, with B ono, Jeff Lynne, Don Was, and others producing, came during the period that saw Orbison’s career get a well-deserved resuscitation from his work with the Traveling Wilburys, represented here by “Not Alone Any More.”

Lynne also produced the Mystery Girl album, which yielded Orbison’s last hit, “You Got It” his highest charting single (# 9 in the U.S., #3 in the U.K.) since “It’s Over” in ’64. Included here, it’s a performance as impressive as any in this 107-cut collection – one that can, without equivocation, be called “essential.”

Check This Action: Everybody Gone Surfing?