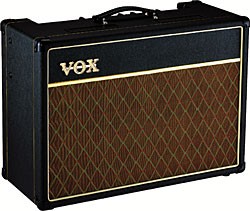 In the lore surrounding Vox Amplification, the AC30 is the king of the hill, the alpha male, the one that first springs to mind. But history reminds us that when they were introduced in the late 1950s, the AC15 actually preceded the AC30 by almost a year, which makes it the granddaddy.

Bolstered by high-profile endorser/players like Cliff Richard’s backing band, the Shadows, and four guys from Liverpool, the AC15 held its own right up until certain performers started demanding high-power gee-tar amplification (damn you, Pete!).

Still, the AC15 has remained a darling in the eyes of Vox enthusiasts, and the company recently began offering an updated version dubbed the AC15 Custom Classic.

A tube-powered combo with one 12″ speaker, the AC15CC sticks to tradition in its use of two EL84s in its output section and two 12AX7s in the preamp, but makes a decided break with the addition of a master-volume control and “global” reverb and tremolo circuit. The top-mounted control panel maintains a traditional aesthetic, playing host to knobs for Master volume, Speed and Depth for the tremolo circuit, Reverb Mix, and Bass, Treble and Volume controls in its trademark Top Boost section, along with a single input jack and switches for Power and Standby. The back panel has two speaker output jacks and a footswitch jack. The included footswitch lets the player engage the tremolo and reverb circuits.

The AC15CC’s cabinet is constructed of Baltic Birch plywood, handsomely covered in the traditional Vox black tolex, with signature Vox diamond-pattern grillecloth. Chickenhead control knobs give a vintage touch. Inside is some very clean wiring, and while the amp isn’t entirely point-to-point handwired, the wiring we could see was flawless.

To test the amp, we used our stock ’70s Fender Stratocaster and a Hamer Sunburst Archtop Custom with Seymour Duncan ’59 humbuckers. We started by plugging in the Strat and setting the amp for a clean sound (Master volume all the way up, Top Boost Volume at about 1/3, Bass nearly all the way up, and Treble just past 1/4) and the AC15CC proffered a very sweet class A tone, very clear and sparkly, with big, solid low-end response. Touch sensitivity and response were remarkable, very smooth, and with no harshness at all – 100 percent Vox!

The tone stayed relatively clean until the Top Boost Volume knob reached the 2/3 point, when it started breaking up very nicely. We pushed it to full and got a higher-gain rock-like tone that stayed tight and full until (and after) it was loud enough for use in a club. The tone was very impressive.

We found the vibrato circuit to be smooth and even, with lots of range from slow to fast. The reverb was a bit springy for our tastes, and sounded a little separated from the circuit. It was fine in small amounts.

Using the Hamer and with the controls set back to clean, we again got a nice, clear, sweet tone with big low-end and nice sparkle; notes positively popped, with fantastic separation. We set the Master volume and volume about 2/3, we got exceptional blues and rock sounds that cleaned up nicely using the guitar’s volume. All pickup positions sounded great, with very balanced frequency response. For being a fairly diminutive amp, the AC15 sounds very full and fat.

After noodling around a bit with the Strat and Hamer, the AC15CC was sounding so good that our curiosity got the best of us and we simply had to give it a run with our ’59 Fender Esquire. To nobody’s surprise, the amp gave the same fat, full, sparkly tone, with some of the nicest modern country class A twang you’ve ever heard! For fun, we grabbed a 2×12″ extension cabinet and again got the expected response; bigger, fatter twang, rich, sparkly, and simply exceptional.

The AC15CC is made in China, but again disproves the prevailing wisdom that good stuff can’t come from there. Will history treat this version of the AC15 with the same reverence as its forbears? Can’t say, but with its modern features, and exceptional tone, it may be the most usable AC15 yet, at a surprising price point.