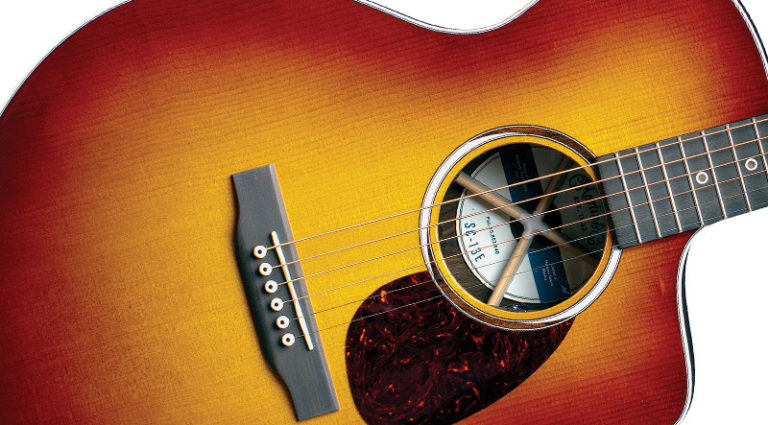 For nearly two centuries, Martin has been building acoustic instruments befitting the company’s august reputation. The slew of budget-friendly models in its Performing Artist series offer modern takes on traditional models. The new SC goes a step further, blowing up the blueprint.

Made in Mexico as part of the Road Series, the SC-13E Special Burst takes a fresh look at the acoustic guitar from the braces outward. The flashy, inimitable cousin to flagship Martins, the SC’s slightly offset body is a radical leap from familiar sizes and styles we usually see from Nazareth. The solid Sitka spruce top is finished in a pleasant glossy burst or more traditional natural finish, and the glossy ziricote veneer back and sides are dark and wide grained.

On the knee or hanging by a strap, the SC size and shape are comfortable and well-balanced. Coming in dimensionally between grand performance and orchestra models, the SC is big enough to be heard but not quite the armful a dreadnought can be. Martin calls its bracing pattern “Tone Tension X Brace,” and it’s apparent with a quick glimpse into the soundhole that this configuration is a departure from standard bracing patterns in the current Martin lineup.

The SC-13E is further equipped with variable-ratio open-back tuners using “skeleton” tuning keys, along with ebony fretboard and bridge.

Deemed the “Low Profile Velocity” shape, the neck starts thin at the 1.75″ nut and stays thin all the way to the 13th-fret connection to the body. Here, rather than a conventional heel, players find a fairly radical scoop that allows easy access to the higher frets but also hints at the unique system inside, where a wooden neck block has a two-way adjustable truss and “linear dovetail neck joint.” It feels and plays like a modern electric guitar neck.

The test model weighed in at a shade over four pounds and was loud and nicely responsive; low-end was noticeably restrained, which might not be good if you’re looking for a more-traditional big-body Martin sound.

The SC-13E is incredibly playable; action out of the box was low, and the L.R. Baggs Element electronics sounded warm and full. It’s an intriguing take on the future of acoustic/electric guitars. Though not necessarily priced for beginner or intermediate players, it’s a strong contender when thrown in the mix among compeition in its range.