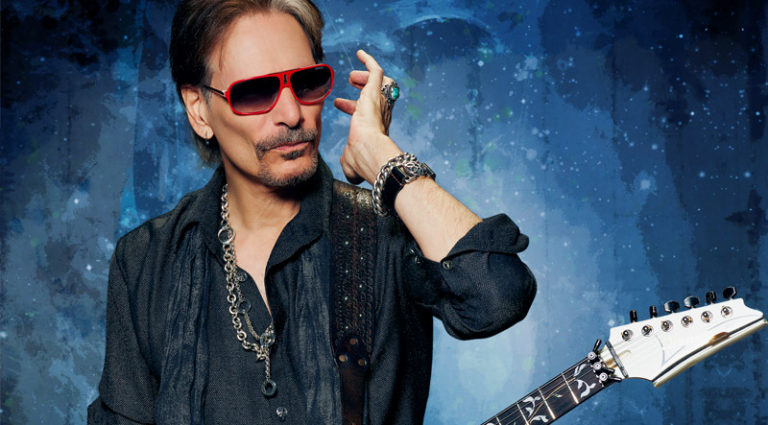 More than 40 years into his career, Steve Vai is still pushing himself as a musician and exploring the boundaries of the guitar. A new custom, multi-neck Ibanez called The Hydra is part of the creative process, along with a commitment to get outside his comfort zone. As proof, his newest effort, Inviolate, is one of the best – and downright bravest – albums he has ever made.

Overall, there’s a feeling throughout Inviolate that’s melodic and expansive. This album ain’t shred – it’s a very musical kind of fusion.
I believe that if you find something you really enjoy doing and keep at it, it’s inevitable that you will evolve that craft. For me, it’s always been about finding richer melodies and unique, yet subtle, techniques that are a little different than what I’ve done in the past.

Talk about the Ibanez Hydra guitar and how you deploy it on the opener, “Teeth of the Hydra.”

The Hydra started out as an inspiration from Mad Max: Fury Road. There’s this scene where a wild man is strapped to the front of a truck, playing a crazy-looking guitar. I thought it was pretty cool and was instantly inspired by the thought, “I want a guitar that has a 12-string neck that’s half fretless, a seven-string neck with a whammy bar, a 3/4-scale bass that’s fretless under the E and A strings, and 13 harp strings.” It also needed to look like steampunk from Hell!

How did it get from your brain to reality?
I sent my idea for the guitar along with some steampunk-type clippings to the brilliant engineers at Ibanez and they sent back a rendering of the Hydra. I was stunned. It took several years from that point to tweak the design before a prototype was actually made. Finally, one day I received the finished Hydra; it was awesome and intimidating at the same time.

Once you had the Hydra in your hands, what was the next step?
I knew I was going to compose a piece of music on it – one where the Hydra is the main instrument. However, by juggling all the necks, the melody still needs to sound seamless. The song couldn’t sound like a gimmick; it needed to stand on its own as a piece of enjoyable music.

When I first saw the guitar, I immediately named it the Hydra and the song title would be “The Teeth of the Hydra.” This came from my affinity for vintage claymation movies such as Clash of the Titans and Jason and the Argonauts. In Argonauts, the Hydra is a multi-headed mythical creature, and its teeth spawn the children of the Hydra, which are threatening skeletons that spring from the ground and come to life to chase Jason and the gang.

What’s in its guts?
The engineers at Ibanez brought great care and passion in constructing this instrument. They added a full-on guitar synthesizer section, piezo pickups, a sustainer, sample-and-hold features, and more. An ethernet cable from the Hydra carries four outputs for each neck and the 13 harp strings; they go to a three-rack-space brain that weighs more than a city block.

How did the composition come together?
I knew I still needed to compose the piece, so I carved out six weeks and sat behind the Hydra, which was on a stand, and imagined how I wanted to use every feature of the guitar and all the necks. When you listen to “Teeth of the Hydra,” it’s cool to remember that all the bass, seven-string, 12-string and harp strings were performed on the instrument in one performance. I built up the parts and recorded them in sections as I went – imagine something akin to juggling chainsaws.

“Little Pretty” feels like a film score, but with guitars.

Since I was young, long before playing the guitar, I wanted to be a composer; through the years, I’ve composed hours of dense, contemporary compositional music. With something like “Little Pretty,” I picked up the guitar and played the first four chord changes, telling me which direction the rest of the harmonic structure and melody would go – they set the tone for the psychological atmosphere of the entire track. Also, that’s Jeremy Colson on drums and Bryan Beller on bass; those guys delivered perfectly for this track.

What’s the story behind the complex guitar solo?
The solo section needed to exaggerate the emotional atmosphere of the rest of the song and have a set of chord changes that have little relation with one another regarding their academic and atmospheric structures, and they needed to change every bar. No chords were built off of conventional scale structures and each one carried with it a completely different emotional dynamic, from one chord to the next. The whole section was in an odd time signature and the solo itself starts out relatively sparse and builds throughout. It couldn’t sound like bad jazz or fusion – I felt the phrasing in the solo should reflect the dynamics of human speech patterns.

Tell us about the Gretsch you used on “Little Pretty.”

I love all sorts of guitars and have a good collection of Strats, Firebirds, ES-335s, D’Angelico guitars, and Les Pauls. I also like the unique sound that a Gretsch has, and purchased a G6118T-60 that hung on my wall for years, just waiting for the right song. From the get-go, I knew that the unique sound of that Gretsch was the right thing to make the chord changes for “Little Pretty” to speak a particular way. My signature Ibanez Jem and PIA models are my comfort zone; every other guitar I play introduces limitations to the fullness of my quirky technique, but they inevitably offer something else. For a track like “Little Pretty,” it required something different, and the Gretsch kept calling me.

“Apollo in Color” is another jazz-rock epic.

It’s more of a throwback to my Berklee fusion roots. I picked up the guitar one day, turned on the recording on my iPhone, and strummed those chords and sang the melody. Perhaps seven years, later I came across it and found some energy I liked so I decided to unpack it. The track was mostly Lydian tonality, but I do so much of that I wanted to spice it up a bit, so the chord – E, G#, D#, B – is being strummed through the whole solo. The rest of the notes in the scales and additional upper-structure chords varied from bar to bar.

There are other instruments, too.

I like to collect small stringed instruments, and layered many of them into the track to outline chords. I used a saz, oud, mandolin, ukulele, banjo, dobro, cavaquinho, sitar, and a few I couldn’t figure out the names of. It also helps to have monstrous musicians. On “Apollo in Color,” that’s Vinnie Colaiuta on drums and Henrik Linder on bass. The keyboards were done by my friend Dave Rosenthal.

You’re pushing your own technical limits in “Candlepower.”

I like to occasionally set up various limitations in order to challenge myself. I might tell myself something like, “Do this whole solo with one finger on one string.” For “Candlepower,” I set up these kinds of parameters, such as using a Strat-style guitar that’s outside my comfort zone and a clean tone with just ambient room sound, which is very different from my usual high-gain and delay effects. Also, I didn’t use a whammy bar – you might as well remove my arm (laughs) – or a pick, just fingerpicking.

Can you discuss your joint-shifting method of bending multiple strings at once?
These parameters helped create something different for me, but they weren’t enough. I told myself I had to do something that I’ve never done and had this idea in the back of my mind for many years that involved bending two to three notes at a time – in different directions – while using open strings and pull-offs to create phrasing that sounded unique. Bending a note and holding it while playing other notes is a relatively conventional country-guitar technique, but I didn’t want it to sound anything like country guitar, which I can’t do very well.

“Imagining a melody or technique, working on it and manifesting it, then enjoying it… sustains my deep interest and joy in music and the guitar.”

What did you learn from this approach?
I discovered that in order to bend notes with multiple fingers in different directions, while allowing open strings to ring, I had to come down on the notes with the tip of the finger. I could only bend the top joint of the finger, so the rest of the finger is not touching the strings. I had to “shift the joint,” so to speak, to stretch the notes. It worked! And the results are obtuse and beautifully peculiar. I was only able to work this technique out for a few passages in the song, but in my mind’s eye, I can see a whole guitar piece using this joint shifting technique way above and beyond what I’m doing here.

Tone-wise, do you crank your amps in the studio?
I actually don’t play that loud in the studio and, when I record guitars, I usually also record the direct signal. This gives me the opportunity to re-amp it later and merge various amps into one sound. The majority of guitar tones come from my signature Synergy module through Legacy power amps, into a stereo setup using two 2×12 cabs with vintage 30-watt Celestions. I also used a Lazy J combo, plus Synergy Bassman, Marshall plexi, Vox AC30, Diesel, Friedman, and Bogner modules.

Which guitars and effects do we hear?
The Hydra is on “Teeth of the Hydra,” an Ibanez seven-string prototype on “Zeus in Chains,” the Gretsch on “Little Pretty,” and various Ibanez Jems and PIAs on the others. For “Apollo,” I used a custom-built Bruno guitar, built by a luthier in Slovakia and given to me as a gift. I don’t use many pedals, but I plug into either a Cry Baby or a Morley Bad Horsie wah, Ibanez Jemini distortion pedal, and a Digitech Whammy pedal. The send from the Synergy module goes into a Fractal Axe Effects III, which does all the heavy lifting regarding effects. Then, the signal comes out of the Axe, in stereo, and returns to the two Legacy power amps and 2×12 cabs.

Your video for “Knappsack” gathered 1.4 million views on Youtube. Aside from performing it entirely with one hand, we can also observe your circular vibrato style, which is unusual.

Yes, I believe vibrato is the heart of a note’s expression, but can be under-utilized in rock – and even dysfunctional at times. Mine developed when I reasoned that regular rock vibrato only makes the note go natural to sharp, while classical type vibrato can give you natural to flat to natural to sharp. But for me, classical-style vibrato on the guitar is just not rock-and-roll enough, so I combined the two and get the best of both worlds – but I will employ any of those techniques based on where I am on the neck and how I feel the melody should speak.

You’ve been doing this for almost 42 years. What keeps you going – is it the sheer joy of playing guitar?
Yes. Music and guitar are the things I’ve been most attracted to in this life. Imagining a good idea, such as a melody or technique – working on it and manifesting it, then enjoying it – that’s the gravity that sustains my deep interest and joy in music and the guitar. There are many more things I would like to accomplish, of course, but I’m thoroughly satisfied, and even a bit stunned at all that I’ve already achieved. The better it gets, the better it gets.