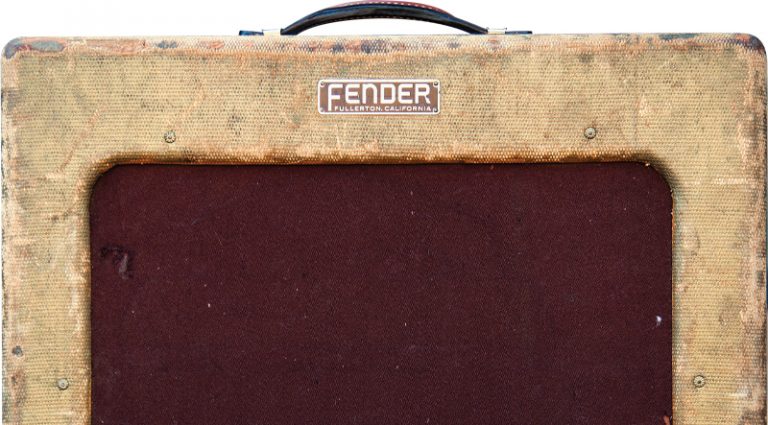 Ever plugged into a well-played vintage combo, run your hands over its road-worn tweed covering – scuffed to a cashmere-like texture – and thought, “If only this amp could talk”? Well, if this one can’t literally speak for itself, its original owner can, and between them they’ve sure got stories to tell.

Not only did this amp help land a young steel player his first professional gig, it introduced him to his bride-to-be and backed legendary performers in country, rock and roll, and even hard rock. And that’s just the start.

Richard “Doc” Buffington was an aspiring 14-year-old steeler just out of middle school in July of 1948, when he approached five-time National Fiddle Champion Dick Barrett at a country-music show outside his hometown of Cottage Grove, Oregon. The kid observed that Barrett’s band was missing a lap-steel player – and put himself forward for the job with an on-the-spot audition on his beat-up Supro. Barrett offered him the job with the caveat “the guitar has to go,” then casually mentioned how Bob Wills’ Texas Playboys had just switched to Fender’s hot new Pro Amps. As there was no Fender dealer in Oregon at the time, the young hopeful acquired the phone number for the factory in California, reached Leo Fender himself, and ordered a new Pro Amp along with one of Fender’s Dual 8 Steel guitars to plug into it. Fortunately, the set was in stock; just a few months earlier, Fender had been making most amps to order. Leo put the pair on a Greyhound bus from Fullerton to McCoy’s Drugstore in Cottage Grove, where the proprietor, Buffington’s uncle, Glen Arne, stocked Black Diamond strings and picks but was happy to facilitate the sale for his nephew as the drugstore’s first big music order. To reimburse his uncle, Buffington would pick beans at a local farm for 3¼ cents per pound.

The Fender set arrived two days before rehearsal, and the young steel player quickly settled in with the Dick Barrett Band, where he joined guitarist “Curley” Kesey and sisters Sherily and Glynnell Dunaway, singers and fiddlers. Kesey was the uncle of Merry Prankster Ken Kesey, author of One Flew Over the Cuckoo’s Nest, while the Dunaway sisters were cousins to future Alice Cooper Band bassist Dennis Dunaway; younger sister Glynnell would one day become Mrs. Buffington.

This outfit hung together for five years, backing early country stars such as Slim Whitman, George Morgan, Skeets McDonald, T-Texas Tyler and others. By 1955, though, the young newlyweds needed more stability, and Richard enrolled in dental college. If they ran low on funds, he would turn to music to earn extra cash, landing jobs first with a young Willie Nelson at Tiny Dumont’s Park in Oregon, where the first half of each show was broadcast on the radio, then at Division Street Corral, in Portland, where he backed touring Grand Ole Opry package shows featuring the likes of Carl Smith, Goldie Hill, Cowboy Copas, Justin Tubb (Earnest’s son), and Marvin Rainwater. These gigs led to shows where Doc jammed with guitar star Roy Nichols and hitmakers Jimmy Wakely and Margret Whiting, which in turn led to a weekly TV gig with Clair Musser & The Powder River Ramblers, where his steel licks even found themselves behind early rock-and-rollers such as Ferlin Husky and Jimmy Rodgers.

After a few more years of moonlighting, Glynnell was less enamored of her husband’s after-hours lifestyle, and enticed Doc to settle down. In 1963, the couple moved to Phoenix to set up a dental practice, at which point Doc loaned the Pro to young Dennis Dunaway to use as a bass amp with the future Alice Cooper.

“Vince [Furnier, later known as Alice Cooper] was over at the house every day, and he and Dennis couldn’t really play the guitar very well at all,” said Doc. “But they were track team members at Cortez High and I had been a track-team guy, so we got along pretty well. Those two were really funny! They did parodies of everything – that funny stuff you just can’t put out of your mind.”

After a couple of years, Dunaway was on his way to the big time and the Pro went back to Doc, “still with some traces of gold paint and more beer on it than I ever drank in my life!”

The Pro was used less and less over the next 20 years as Doc’s dental practice grew, during which time he became dentist to the Phoenix Suns and acquainted with several NBA stars.

Fast-forward to 2013. Following the death of his beloved wife, a mutual friend introduced the steeler to bassist Bill Carey, a musician with a long history in the area’s music scene. This mutual friend figured that Doc – now playing a ShoBud pedal-steel – might sit in with Carey’s band to help take his mind off the loss. Doc’s sound clicked and he became a permanent member of Cecil’s Boys, appearing at regular shows in Black Canyon City for the past four years.

When Carey, an avid reader of VG, caught the April ’17 feature on Dennis Dunaway, the bassist’s reply to a question about his earliest amp rig (“A Fender tweed that my cousin’s husband loaned to me. He’d used it when he played pedal-steel in a country band in Oregon.”) rang a bell. It was Doc Buffington’s old Pro.

Through the years, the amp has been maintained to remain operational, receiving new signal caps, filter caps, and a replacement handle. But it retains the essence of the Pro that hit the ground running right off the Greyhound bus from Fullerton nearly 70 years ago.

“It’s crisp at medium to loud volumes, but of course as you crank it a little, it has that beautiful breakup that’s so cool for blues,” Bill said. “It’s great with a Strat or older Gibsons like the ’53 Les Paul we use for blues or light rock. And it’s a fantastic recording amp!”

“I know it’s good for country!” Doc further relates. “It oughta be good for anything because it’s got that old blue Jensen, and that’s a real workhorse. I like everything about the amp because it’s so simple. The only thing I don’t like is that some of the gold paint is still on it from Dennis. I never told him that I wasn’t really happy about that.” Regardless, the amp looks great and is still in daily use by the same owner. That alone is a story worth telling.

Special thanks to Bill Carey, who facilitated the detailed exchange of information with Doc Buffington.