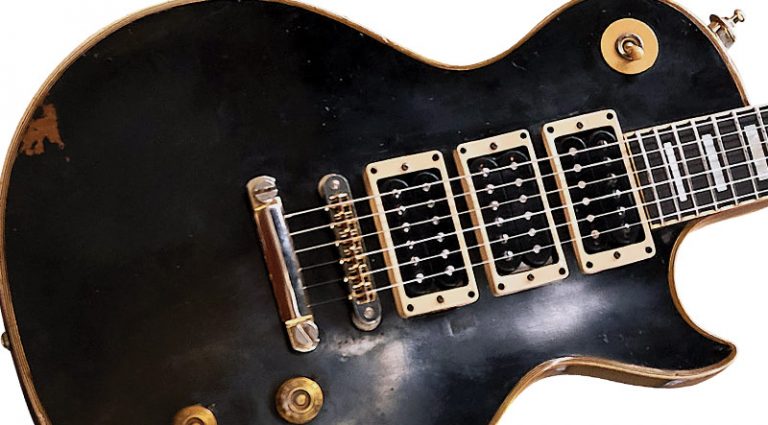 Gifted to Peter Frampton after a 1970 Humble Pie concert at Fillmore West in San Francisco, for years, this ’54 Les Paul Custom made famous on the gatefold cover of Frampton Comes Alive! was his unfailing companion. And like many road dogs, it has a long, bittersweet history.

Modded by Humble Pie fan Mark Mariana, its original pickups were gone in favor of ’50s Gibson humbuckers when he handed it to Frampton, who used it onstage that night, then while recording Humble Pie’s Rock On and Rockin’ The Fillmore, as well as his solo studio albums, Comes Alive!, and dozens of sessions including John Entwistle’s Whistle Rymes, Harry Nilsson’s Son of Schmilsson, and records for Nicky Hopkins and Johnny Hallyday. But then, after a 1980 concert in Venezuela, his band’s equipment was in a cargo plane that crashed during takeoff. The pilots and flight crew perished.

“We were devastated,” Frampton said.

Assuming their gear was destroyed in the fire that followed the crash, the band returned home and for the next 30 years Frampton was left only with fond memories of the Les Paul.

One day in 2011, he received an e-mail with detailed photos of what the sender believed was the guitar. Bouncing back with questions, Frampton learned that not only had it survived (apparently, the gear had been tucked in the plane’s tail section, which separated during the crash, giving it distance from most of the fire), but it wound up in the hands of a local player. Years later, a kid brought it to a part-time luthier in Curaçao (whose day gig was customs investigator), asking, “Can you make this playable?”

Frampton recalled being told the story.

“The kid takes it out of the case, and the luthier’s eyes get huge and he says, ‘You know what this is, don’t you?’ The kid said, ‘What do you mean?’ claiming it was his dad’s guitar and that they’d bought it from a guy who played it for years. He said it had been in a closet but he wanted to start playing it. The luthier told him, ‘Well, leave it and I’ll see what I can do.’

“Overnight, he stripped it of parts and took some amazing forensic photos – with pickups, without pickups, with machine heads on and off. He basically documented the guitar from top to tail, then sent the shots to me. In the morning, the kid came back and the luthier said, ‘You know this is Peter Frampton’s guitar, right?’ But the kid left with it.”

Two years later, he called the shop again, looking to sell the guitar. Shifting to investigator mode, the luthier contacted Curaçao’s Minister of Tourism, who bought it on behalf of Frampton, who then reimbursed the state. While he doesn’t disclose the amount, he said, “I didn’t get had or anything, it was basically a small finder’s fee.”

Now, Frampton plays the guitar onstage most nights, and it still spurs flashbacks. “It’s kind of freaky,” he said.

Another part of this resurrection tale involves the Gibson Custom Shop, which in 2015 made 35 replicas fittingly roughed to match the original – including the missing paint, neck wear, and white pickup surrounds. Frampton saw to it that Mariana was given the first one.

This article originally appeared in VG July 2019 issue. All copyrights are by the author and Vintage Guitar magazine. Unauthorized replication or use is strictly prohibited.