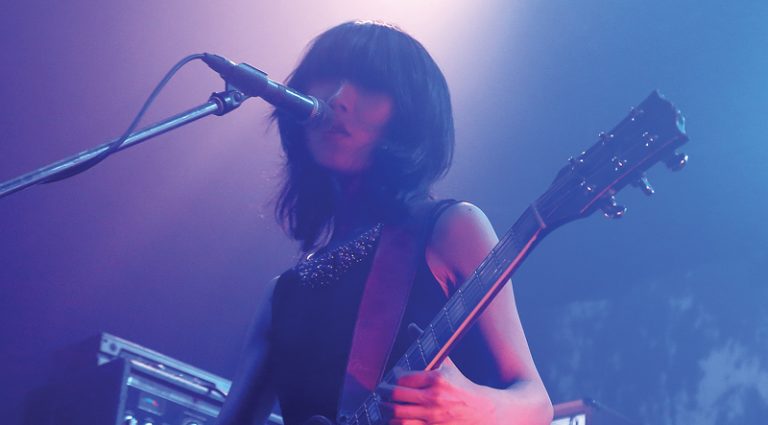 Anyone who digs fuzzed-out hard rock with amps pushed to their limit should add Boris to their play list. Hailing from Tokyo, the group has been fed and guided by meaty riffs and searing solos from guitarist Wata since its 1992 inception, with recordings such as Akuma no Uta (The Devil’s Song), Pink, and Altar, a collaboration with fellow volume worshippers Sunn O))). As evidenced by its 23rd studio album, Dear, the band is heavier than ever. We spoke to Wata with help from translator Kasumi Billington to discuss the band’s recent work and her guitar setup.

How did you approach Dear, from a guitar perspective?

We recorded it simpler than ever. We’ve been self-recording with Pro Tools for about 10 years now, but the basics were recorded in one shot. We set up microphones and would live-record in the room, releasing sounds from our amps – waves and undulations created as the sounds of the guitars interfered with each other. The phenomenon enriches the songs. Rather than grids or counting, we measured intervals with eye contact, and I think we were able to create songs that could only be produced at that moment. I want to keep making music that can’t be copied and pasted.

How do you get such great vintage sounds and tones on Boris albums?

By releasing a loud sound that could make a room vibrate with a full stack. In front of the amp, I perform as I connect with the air as feedback keeps happening. It’s also important to use equipment you like.

Which guitars, amps, and effects do you use nowadays?

My guitar is an ’86 Gibson Les Paul Custom, and my amps are a vintage Matamp GT120 and Orange OR120. Usually on the pedalboard are a vintage Electro-Harmonix Big Muff, a Roland RE-150 [Space Echo], ZVex Super Duper, Dwarfcraft Shiva, MASF Wata Fuzz, Jim Dunlop Crybaby, reverb, and an EBow.

Fans regard Pink as a classic album. Did you have a sense it could be special while you were writing and recording it?

Around that time, we were doing more tours and shows abroad, and we were simultaneously producing multiple albums, so the band was going non-stop. We were madly busy – I don’t have much memory of it.

Which guitars, amps, and effects did you use on it?

I think we used what we mainly use now – Les Paul, Matamp, Orange, Space Echo, Big Muff. I think it was about the time we began recording with Pro Tools. The hard disk would freeze when we made a loud sound, and there were a lot of unexpected troubles. Depending on the song, after recording the basics on a two-track cassette, we would transfer it to Pro Tools and overdub. The first song, “Farewell,” only had eight tracks in final. It was a good mixture of trial and error back then, including the parts that didn’t go well. The less the number of recording tracks, the better. This new album has fewer tracks.

Who are some of your guitar influences?

Pink Floyd’s David Gilmour for his use of echo, pick harmonics, and solos, Eddie Hazel for his wailing solos, and Blue Cheer for the boosted fuzz sound.

Which Boris songs or solos are you most proud of?

That’s a tough question. I’ve never ranked Boris songs or chose a favorite – I don’t think I can rank my own children (laughs). In general, I improvise when I record guitar solos a few times, and I pick up the good parts and build along. It’s kind of like I’m song-making with a duplicate of myself who is playing unconsciously. There’s so much ongoing mystery to a song or guitar solo that’s been finished while I had been unconsciously playing, and I don’t get bored of performing it.

Do you prefer working solely with the band, or when Boris works with outside collaborators?

I like both. I’ve been continuously influenced by members of Boris, and I learn a lot from performing with other musicians. I think it’s a wonderful thing to be able to do things that you can only do with that specific person.