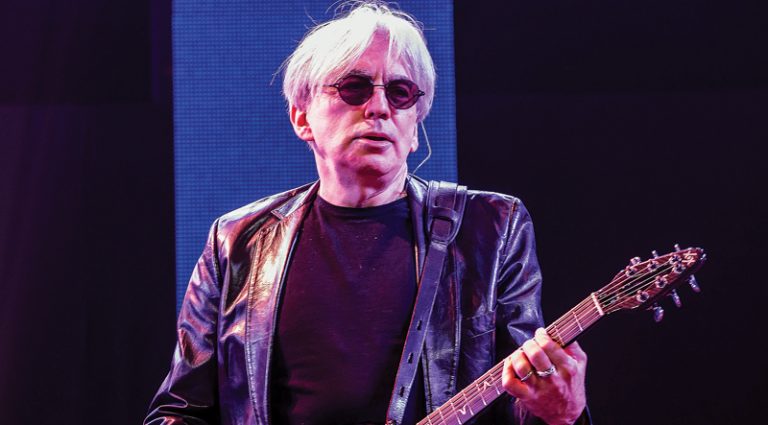 While Blondie’s Chris Stein won’t be mistaken for a shredder soloist, there’s no debate he’s an underrated rhythm guitarist and gifted songwriter, as he co-wrote (with singer Debbie Harry) classic tunes such as “Heart of Glass,” “Dreaming,” “Rip Her to Shreds,” “In the Flesh,” and “Rapture,” among others. Blondie recently released Pollinator, its 11th studio album, fifth since reuniting in 1997. Stein spoke with Vintage Guitar about the release, his guitar collection, and guitarists he shared the stage with at CBGB’s once upon a time.

Which guitars, amps, and effects did you use on Pollinator?

We used a bunch of Gibsons, and I used my XOX Audio Tools carbon-fiber guitar a lot. For shows, I use really lightweight guitars – I can’t be schlepping around a 10-ton guitar. I used a Moog guitar on the record a bunch, which is a really cool thing even though it’s so complicated. We used studio amps and not a hell of a lot of effects. As we moved along, a lot of it was under [producer] John Congleton’s leadership for guitar sounds. Stuff in the studios – Vox for some of those twangy, low guitar sounds.

The album has a modern sound, yet songs like “Doom or Destiny” are reminiscent of classic Blondie.

That was an attempt to do a modern-but-old-style punk song. A little bit of both worlds.

Do you have a guitar collection at home?

Yes. I wish I had all my old guitars that I sold off when I needed money. I have plenty of stuff now, but I had great stuff I got rid of over the years. I’ve got a hot Les Paul I gave to a friend who put two Charlie Christian pickups in it; he did an amazing job, it looks factory-issued and I used to use it for shows, but it’s kind of heavy. I also have a bunch of Tom Lieber guitars. He had some part in developing Jerry Garcia’s [Tiger] and he’s a great maker on his own. I have old Burns guitars; I got to meet Jim Burns back in the day, which was pretty cool. Lots of stuff.

You used to be affiliated with Burns.

Yeah, I endorse them. We went to his factory in the U.K., and Jim was a great guy and a really cool character. He got really screwed when he signed a bad licensing deal with Baldwin because he wasn’t allowed to use his name for a certain amount of years after the contract was up. He was kind of pissed at the guitar industry.

What was your guitar setup like with Blondie in the ’70s and ’80s?

I had a lot of Fender amps and a ’56 maple-neck Strat I used all the time that was really great. I wish I hadn’t sold it, but I just ran out of money and sold a lot of guitars. I mostly used Strats because I was such a Hendrix freak; I referenced that all the time. I used Fender amps and occasional Marshalls.

You mention Hendrix. Did you get to see him live, or meet him?

I never met him, but I’d see him walking around the Village. And I only ever saw him at Woodstock, which was a nice moment.

Who were some of the underrated guitarists from New York and CBGB’s when Blondie played there in the mid and late ’70s?

Richard Lloyd, from Television, was a terrific player. I don’t know if Johnny Thunders is really underrated, but he had a signature style style that you hear referenced. A lot of our peers.

Do you consider Robert Quine, from The Voidoids, underrated.

Quine was off the hook… Jesus, he was in a different dimension than everybody else. He was a great jazz player.

How do you compare playing with the current Blondie lineup to that from the ’70s and ’80s?

Technically, everything is a lot tighter and easier to do – in-ear monitors and all the modern conveniences we have makes everything great. And the younger guys are great – Matt [Katz-Bohen, keyboardist] and Tommy [Kessler, guitarist] are terrific. Tommy was in Rock of Ages pretty much for the whole run on Broadway. But he plays every night, so it’s always super-tight.