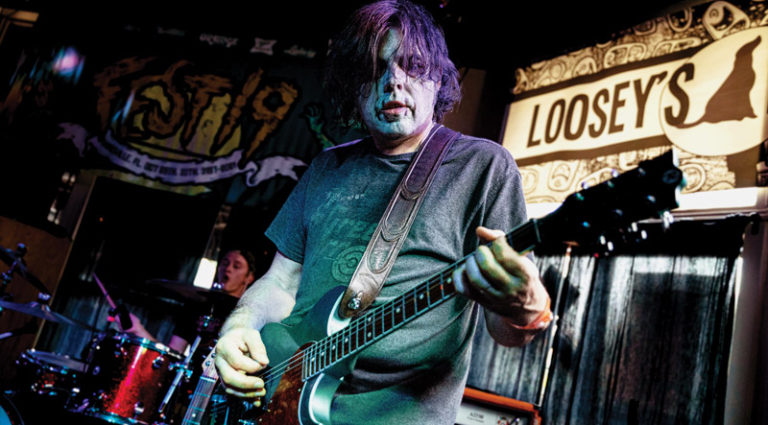 Sam Williams is known as the guitarist for the roots-punk band Down by Law, but now he’s shaking it up with his surf outfit, Black Moon Valley. Their album, Songs From the Black Valley, finds the Tampa axeman mixing nasty modern guitar with old-school twang and ’verb – as well as kitschy ideas from old horror flicks. Armed with wolfbane and garlic, VG stepped into this mad surf scientist’s laboratory.

Where did you get the idea for blending surf rock and vintage monster movies?
I’m a total nerd for both Halloween and horror movies from the ’50s and ’60s – they’re both fun and dark. While our music has a lot of surfy vibe to it, we probably relate more to bands like The Cramps or the Damned than the Beach Boys.

You’ve been called “the Alex Lifeson of punk guitar.”
I saw this mentioned in a few reviews of our last Down By Law album. I have always loved Lifeson and Rush, even in my punkest of punk phases. When I write, I sometimes think up bizarre formulas in my head like, “What if ‘Fast Eddie’ Clarke of Motörhead played in Agent Orange, and they all lived in Ireland.” I’m also a proponent of chorus effects, so with the tone I had dialed in and chord voicings I use, Alex kept organically becoming part of my sound. Anyway, I love Alex’s playing to death and he seems like an excellent dude, so I’m honored by the comparison.

Your guitar is a huge part of the Black Valley Moon sound, like on “I’m Ok.”
When we decided to add a vocalist, my one promise to myself was that I wouldn’t compromise the guitar-centric nature of the music. So the guitar is as busy and complex as it was when we were instrumental, but I’m pleased with the way the singing and guitar came together.

Who were your guitar influences?
Eddie Van Halen is the reason I started playing. Growing up, I was heavily influenced by Brian Baker while he was in Dag Nasty, and also went through a Brian May phase. I was really on a Wes Montgomery kick for a bit, and love the chord voicings Eric Johnson uses. The attitude and tone of Johnny Thunders, Rory Gallagher, and Link Wray are big inspirations – and Hank Marvin is king for ’60s instro tone. I’d currently rate Brian Setzer and Eric Gales at the top of my list.

It sounds like you frequently pick with your fingers?
I use a lot of hybrid picking, but a few are straight fingerpicked. The main melody part for “Cabinet Of Curiosities” is all fingers. It was largely inspired by Merle Travis and Marty Stuart, both of whom I admire.

Which axes help you achieve that serious twang?
I’m an exclusive player of Reverend guitars. For this record, I used a Six Gun for the Strat-type sounds that dominate the record. Also, a Reverend Sensei with TV Jones TV-HT pickups – their take on Gretsch Hilo’Trons – and their baritone Descent for “Beware Of The Night” and “Sons Of Dracula.” My favorite Reverend is the Sensei Jr. with a Bigsby, which I played on the grittier rhythm stuff. All the acoustic tracks were done on a Gibson J-50, and our bassist played Reverend Fellowship and Dub King basses.

On “Proxima Centauri Calling,” what’s that ghostly, tremolo-like effect?
That’s simply the tremolo on the amp, a 1968/’69 Bandmaster Reverb. Because it was part of a stereo wet/dry rig, it has a more-disorienting affect than it normally would, almost like it’s bouncing back and forth between speakers.

Tell us about your larger amp rig.

It’s a stereo setup with two amps, panned, and one side much drier. From the guitar, I went into a Fulltone Solid State Tape Echo. After that, the signal was split; one side went to the Bandmaster Reverb with a teeny bit of amp reverb dialed in. The other side went into a clone of a Fender 6G15 tube reverb made by Winfield Amps, and the wet/mix on the reverb unit was dimed. From here, I went into a ’60s blackface Bassman, and each amp was fed into its own 1×12 iso box. The only other thing I used, intermittently, was an MXR Timmy or VFE Blues King pedal if I needed a little push.

“Christmas Time In The Castle Of Blood” is a holiday riot.

I came up with that arrangement quite awhile ago, obviously based on “God Rest Ye Merry Gentlemen.” When doing the final overdubs, the idea struck to make it more of a Brian Setzer-styled solo and see how many references to other holiday tunes I could squeeze in. I played it over Christmas break during some solo shows I do around town, and people loved it. I’m sure we’ll eventually bust it out for a live Black Valley Moon show – it would be great to play during one of those 100-degree summer gigs on a Florida beach.