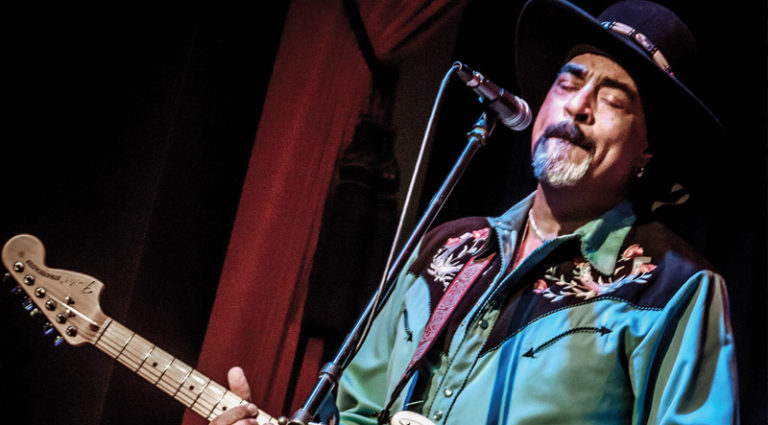 Gregg Wright’s latest album was forged with fire, intensity, and the music that molded him, from guitar-centric country ballads, boogie, and blues-rock to gospel and fire-breathing rock and roll. A road warrior since the ’70s, Wright is nowhere near slowing down. Armed with new songs and loud guitars, not even a pandemic can stop him.

How did the pandemic affect you?
Sometimes blessings come in disguise. When the pandemic came, I was like, “What the hell is everybody gonna do?” Before the pandemic, I was procrastinating. I had a project going, and I got hung up on the details. The pandemic allowed me to say, “F**k it. I’m going to take my time.” That allowed me to relax and do it. Some of the tracks on Big Dawg Barkin’ had two or three takes. I had to pick the best performances. We finished tracking before the pandemic. Then I had to mix it and get organized. It’s the mixing that drives you crazy (laughs); “Is this slammin’, or am I kidding myself?” (laughs)

The album covers more musical ground than most blues-rock efforts.
I was rolling with it. I wanted everything to be on par with everything else. So, this is what it is. Since when has it been a crime for a musician to express himself freely? I don’t give a s**t about the blues Nazis or the rock purists. I did three albums on major labels, and each time it was specifically targeted, and they put me in a straightjacket. The Beatles didn’t have to do that.

Who knew you played Southern rock, gospel, and heavy rock?
The shackles are off. We have streaming services and the internet. More than anything, that’s what this album is about. I have an intelligent fan base, and they’ve come right along with me. I’ve had fans come up and say, “I’ve heard you play so many other things. Why are you just doing this?” They like when I play the blues, when I rock out, they love my ballads, they love all that stuff, and they don’t get that everywhere. I have a flexible fan base, and I’ve gone through a lot of changes over the years. Early in my career, I was a double-Marshall-stack guy. I’d blow the dirt out of your clothes (laughs). Later, I flipped the script and got interested in jazz-rock fusion with odd time signatures and doing things other than playing power chords. My fans rolled with it, and that’s the way it’s been.

Then you got the Jackson 5 gig.

People were surprised when I got that gig on the Jackson’s Victory Tour. They said, “I never heard you play pop R&B before.” They knew me from playing on tour with Albert King and Freddie King, but Michael Jackson is something completely different. I’ve always seen all music as connected in some way. Rock and roll has evolved, but in the beginning, rock and roll was just R&B and country music meeting at the crossroads. Then it went across the ocean to England and turned into something else. But it’s all connected. Unfortunately, record-company marketing geniuses put a mute on what’s natural, because they had no vision.

“Help is on the Way” was tailor-made for an arena tour with Billy Gibbons.

That song was inspired when I bought two Marshall DSL40s and started playing a John Lee Hooker riff. Through those amps, that’s what you hear on the song. Billy Gibbons is my go-to guy, but John Lee Hooker blew his f***ing mind. Billy was plugged into some heavy amplification and heavy s**t. When you play those kinds of riffs, you can hold a room.

Was there a main guitar for Big Dawg Barkin’?
I used two – a stock American Special Stratocaster and my GWR signature guitar made by Fret-King. It has P-90s and I used it on the heavier stuff like “Help is on the Way.” For the bluesier stuff, I used the Strat. On the live track, “Drivin’ to New Orleans,” that’s a straight-up Strat. On the studio tracks, I used two Marshall DSL40s in stereo.

How about effects?
I’m using an H9 Eventide Harmonizer, a Neo Instruments Ventilator II Rotary Speaker Simulator, and the Purple Plexi by Lovepedal. The Purple Plexi gives the grind without all the shower sounds. I hate that sound (laughs). I’ve also been using an Orange Crush 35RT for local gigs. I took that amp to a gig in Mexico. They laughed at me until they heard it. That amp blistered! Never judge a book by its cover.

What’s next?
The pandemic has slowed things down, but I want to get back out and tour. We need to re-establish relationships. I’d love to go to England, Europe, or wherever people are who want to hear this stuff.