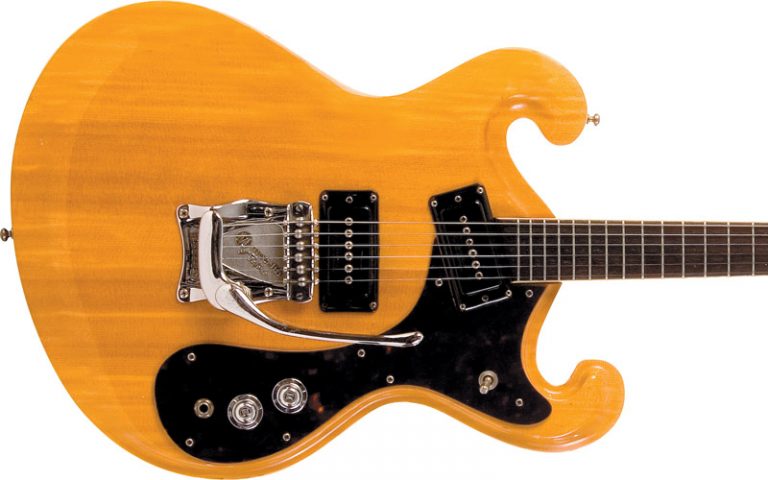 The 1960s were arguably the most memorable decade in the history of American guitar manufacturing. True, some legendary electric guitar models and enduring sonic innovations had been introduced in the ’50s (primarily by Gibson and Fender), but the ’60s played host to the fabled “guitar boom.” Prompted by the Beatles’ appearance on “The Ed Sullivan Show,” millions of teenagers bought millions of guitars and tried to emulate their new heroes.

However, the earliest band/brand association many guitar aficionados remember involves the Ventures, the instrumental combo that preceded the Beatles and played guitars and basses made by Mosrite, in Bakersfield, California. The Ventures/Mosrite affiliation lasted for about a half-decade, but it happened during such a dynamic time in the band’s career that they’ve been saddled with the association ever since (the band played Fender and other instruments before and after its Mosrite endorsement).

Mosrite Ventures models were solidbody instruments, but the company also proffered electric guitars and basses with semi-acoustic and hollow bodies. One of their other endorsees was rapid-fire picker Joe Maphis, whose own signature model appeared in Mosrite’s 1968 catalog, distinguished by a semi-hollow body with a “Selected Musical Grade Spruce” top with no f-holes, and walnut back and sides. Blocks of walnut were glued together, then routed to achieve the body’s semi-solid status. The spruce cap, which had Mosrite’s fabled “German carve” contouring, was then affixed to the walnut portion. Since the back and sides were made from contiguous pieces of walnut, binding was only found at the spruce/walnut juncture. The silhouette of the semi-hollow Maphis instruments was a double-cutaway style with a longer treble-side horn, a tradition on other Mosrite models such as the Ventures models and combos.

Maphis Mosrites included the Mark I (six-string), Mark X (short-scale bass with “duck foot” tuners), and Mark XII (12-string). A double-neck solidbody Mosrite Joe Maphis model called the Mark XVIII was also offered, and one doesn’t have to be an accountant to be able to figure out that the “XVIII” designation referred to a 12-string neck and a six-string neck on the same body.

Finishes available for Maphis guitars and basses were natural and sunburst for the semi-hollow models and various two-tone and solid colors for the solidbody Mark XVIII.

But none of the instruments in that series were quite like this one.

Moreover, it conforms to the finish style of semi-hollow Maphis models, and as a six-string it’s obviously akin to a Mark I. Accordingly, this guitar is likely an early hand-built variant that offered some experimental facets that didn’t end up in production.

So it makes sense to consider the differences found on this instrument from the top down, as well. Note that the headstock says “Model II.” There wasn’t a Joe Maphis Mosrite “Model II” in the aforementioned catalog.

The serial number is embossed into the end of the fretboard, and it almost goes without saying that most observers would presume that “M” stands for “Maphis” and the lower number indicates an early example.

The tightly-scrolled cutaway horns are easily the most eye-catching cosmetic features on the body, differing greatly from the horns found on a standard Maphis model.

Curiously, this guitar has a back made from two pieces of walnut, and separate walnut rims. Accordingly, it’s bound front and rear. The depth of the body from the two furthest edges of the binding conforms to the catalog’s 11/2″ designation (excluding the raised portion of the carved top).

Further corroboration of its age can be found on the potentiometers. While not completely dependable, it can reinforce a production time frame. The one pot that had a code that could be discerned was made in February of 1966.

The owners of this guitar say it was originally acquired from Joe Maphis himself, in Hawaii. While they couldn’t furnish photographs or documentation, its incongruities seem to make it more likely this was indeed a very early example of a Mosrite that was ultimately turned into a production model, which would add credence to the notion it was in the hands of Maphis… And that’s why this installment of “Icon Corner” has a question mark.