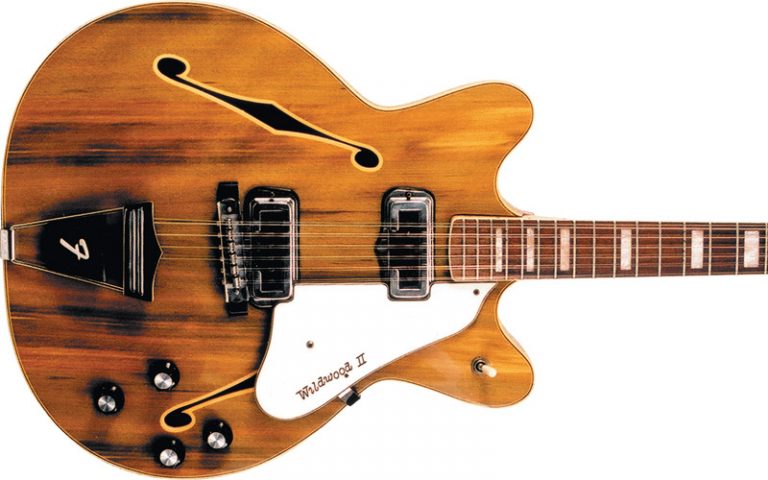 Sex, drugs, and rock and roll. Yea, baby! Okay, to be honest, there’s no real evidence that this 1967 Fender Coronado XII Wildwood was ever associated with sex or rock and roll… But drugs? For sure! Now, this guitar does date from 1967, the Summer of Love, so there’s a good chance it witnessed the ingestion of some illegal psychedelic substances in its day. But the drugs we’re talking about are in the finish. Or to be more accurate, in the wood itself. Because this is one of Fender’s more bizarre diversions, the legendary Wildwood fiasco!

Fender’s Wildwood instruments were part of the contribution to American guitarmaking made by the German luthier Roger Rossmeisl. Born in Graslitz, Germany, in 1927, he was the son of luthier Wenzel Rossmeisl, who named his guitar line (Roger) after his boy. In 1952, Roger came to the United States, where he talked Ted McCarty into a job at Gibson. Rossmeisl reportedly tried to introduce a German-style archtop to Gibson, but they declined, and according to McCarty’s recollection, Rossmeisl left after a year or so, then got a gig as a guitarist on a Hawaiian cruise ship. Rossmeisl ended up in California, where in 1954 (or possibly ’56) he landed a gig as head of the woodshop at Rickenbacker. There, he left his indelible mark on American guitars by redesigning the Combo 600 and 800 guitars, designing the Capri 300 series, and creating the legendary 4000 “cresting wave” bass design. Rossmeisl introduced the so-called “German-carve” top-edge relief to American guitars. A young apprentice working under him at Rickenbacker was Semie Moseley, who once claimed he owed everything he knew about making guitars to Rossmeisl. And Moseley certainly helped popularize the German carve!

In 1962, with folk music booming, Rossmeisl talked Leo Fender into letting him design a line of flat-tops for Fender. This led to the bolt-neck Fender acoustics – King, Kingman, Malibu, Newporter, Palomino, etc. – with the patented reinforcing dowel up the middle known affectionately to collectors as the “broomstick” guitars. Alas, folkies were heavily into traditional guitars. Gibson, Martin, Guild. Bolt-neck acoustics with six-in-line electric headstocks were anathema. While they really don’t sound or play that badly, these acoustics were less than a success, and in fact, Rossmeisl’s association with Fender was less than stellar (though that was not entirely his fault), and certainly not as significant as his stay at Rickenbacker.

In 1965, Leo Fender sold his company to entertainment conglomerate CBS, which may have known something about music, movies, and television, but didn’t know a lot about guitars. Most guitarheads know all about the three-bolt neck that developed from a desire to cut production costs. Less-known are the many endeavors that emerged shortly after the takeover and deviated from Fender’s core competency.

One of these was Roger Rossmeisl’s next project for Fender – the design of the thinline Coronado series in 1966 – Fender’s first foray into the thinline electric. With bolt-on necks and DeArmond single-coil pickups instead of Fender’s own units (again, a first for Fender and probably explained by corporate-think). Three versions were available, with one or two pickups, plus a 12-string with the so-called “hockey-stick” headstock, as seen here. Coronados were also not particularly well-received. Part of the problem was that they were built differently from Fender’s customary method, requiring assembly rather than carving out of solid wood, which challenged Fender’s workers. Another problem may have been trying to compete on the home field of set-neck Gibsons, a situation similar to that with Rossmeisl’s Fender acoustics. It’s tough to displace an ES-335. One problem Fender had was not getting the hang of binding; one batch of Coronados that suffered scorched tops during the removal of bad binding ended up being refinished as the cream-and-brown Antigua models, arguably one of the ugliest finishes ever produced in guitardom!

Which brings us back to the Wildwoods. Also in 1966, Rossmeisl brought the technology of a Danish inventor he knew to Fender. This fellow discovered that if he injected certain dyes into the root systems of growing beechwood trees, they naturally spread the dye throughout the tree as it matured. When harvested, the resulting timber contained a mix of the colored dye and darker grain – very psychedelic, and more or less natural at the same time! The colors produced, and eventually available on the Wildwoods, were green, gold and purple, gold and brown, dark blue, purple and blue, or blue-green.

The Wildwoods were put on Rossmeisl’s broomstick acoustics and the Coronado thinlines, and debuted in 1967. The Byrds were recruited to endorse them, but scuttlebutt has it they intended to ditch the guitars before taking to the stage. Despite their cool reception among players, the Wildwoods are very cool. In the cosmic scheme of things, not all guitars that fail to receive mass acceptance are necessarily failures.

This Wildwood Coronado XII features an attractive green dye in its beechwood. Fortunately, the binding process was refined by the time this guitar was produced, and even the f-holes are bound. The stylized “F” tailpiece was an adaptation of the “R” tailpiece Rossmeisl introduced at Rickenbacker. There is undoubtedly a sonic difference caused by the method of neck attachment. But its significance is a matter of taste, and is most likely negated by various factors in the signal chain. Plus, there’s the tradeoff of being able to adjust the neck set with a shim versus a re-set. In physical mechanics and playability, these are not bad guitars. Once you cut through the competitive clutter, one’s opinion probably will be reduced to how they feel about DeArmond pickups.

Fender Wildwoods lasted only until 1969. How many were made is unknown, but they’re pretty rare. Roger Rossmeisl went on to design the Thinline Telecaster and Fender’s first jazz boxes, the Montego and LTD, neither of which were terribly successful either. Rossmeisl returned to Germany circa 1970, and died in 1979. His legacy is pretty incredible. His Wildwoods may be less so, but they are still remarkable tokens of the rich legacy of guitar history, even minus the sex and rock and roll.